‘tangajorsarpaq eye am this orphan’

Am rejoicing as the week has arrived for two trips into the Big City o’ Londres. I went up yesterday for a full filled day at the Poetry Library where I saw our work in such good company and two bee sandwiched between two such great practitioners as Nancy Campbell & Sam Winston was indeed a privilege. I was of course looking at werds; my verds watti wroted (not like Roth did) and David Jury printed ‘em, Nancy’s words, sam’s words, then loads of others’words like- Gaudier Brezka, Ezra £, Diter Wrot, jon Cage, Gins-oak-burger, Jean Cokatoe (I love her sketches), and many more. However you can’t go see it even ift you cry, it wer only up fer one dae. So am putting some small photos in this blArt to show you what ya mist. And I did this bit of nonsense using up werds wat I sore. 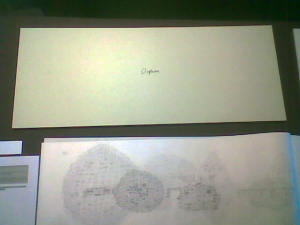 I wer particularly inspired with Sam’s work, ‘Orphan’, in which he used a lot of words he had rote and cut & pasted. So I did the above cut & Baste misen. Eclosion means summat to do with changing frae a pupa to a angel, I tink the transformation has begunned. I invent a new word from a bill stick on a Paolozzi muriel at Tottinghen Caught Rude tube station, Ekanity 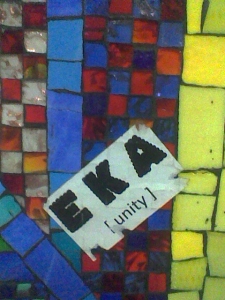 Then at 8pm 3 poets began to read their reactions to what they had seen in the boxes of books prepared for Sunday’s display. William Wyld went first and did a tribute poem to one he’d seen about mud. I loved his words about a reluctant rebellious recalcitrant seal melting into the snow, ‘You took my claws but you couldn’t take my head’. Then Patrick Brandon read his words inspired by John Cage’s Silence on Rauschenburg. Then he did one filling in the gaps in Tom Phillip’s Humument with words like, ‘What is life other than matter complicated by time…’ In my poem in the exhibition I also refer to humans as energy. Hilda Sheehan talked about life and death too, I suppose poetry is lots about our mortality. I enjoyed her Kiss.

She too referred to John Cage’s Silence. Her poem went

It was a poem for Georgina, after holding up a tiny piece of tangled wire Georgina had made and hung silently last year:

I’m impressed with your strings

I Yam a Seeker of Toots 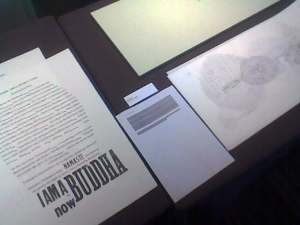 Pete next to Sam’s poem 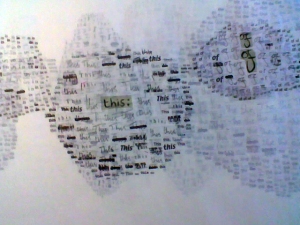 How Sam plays in clouds

One thought on “A Happy Man.”