Fairness, loyalty & dedication are three characteristics which I admire. Below are some stories where folk have not been due credit for their shows of fairness, loyalty & dedication. One is my old friend KP who in my mind should have been new year’s honours listed for the part he played in keeping Macaronis going. Then the great footballer of my youth Jimmy McIlroy who gave his fairness, loyalty & dedication to the small town I was schooled in ‘up th’North’. Examples of men who gave all to a cause yet then the cause didn’t rightly honour them. This continues my beef about our not telling people we know how we admire them as a matter of course. It’s too risky we feel, we don’t like to commit. If you feel it inside, your head, your body etcetera, just let them know, “I appreciate you/this/what you done etc”. You’ll feel a buzz when you do it and they will know you feel good about their efforts.

I had been preparing an obituary for my old friend KP. On approaching a national newspaper which he had read every day to run it they seemed very interested to do so but when they asked one of his line managers at the firm he spent all his working life at who told them he was ‘only an engineer’ and that his name on a patent was merely for ‘an aerial’ they said they no longer had time for him. That’s their decision and they must make them but I find it rather sad that the word of someone who he had probably had to tolerate throughout his working life had now even in his memory scotched a due memorial. I believe the paper got it wrong as they misread the signs although they have been given a bum steer.

However praise be to The Guardian who have published an online obituary  http://www.theguardian.com/education/2015/sep/03/ken-perry .It’s already had 105 ‘shares’ by 2pm friday. Bless.

I informed the paper that KP was very instrumental in developing Over The Horizon Radar (OTHR) and when they contact his ‘superior’ to gain an ‘expert witness’ statement the man said KP did not invent OTHR, that was done by the Americans & Russians in the 50’s, according to him, but I had never said KP ‘invented’ OTHR, just that with his input, knowledge and management some big advances were made and that he was instrumental in gaining a massive contract with the Australians to install the system in Jindalee. His managers (senior, sic) did not credit him during his work life although they kept him on for 7 years after he retired aged 65 and this ungracious chap seems to want to continue their lack of grace-full recognition. However, there are many at his company who say he saved it from earlier extinction with the Jindalee contract and it has been said that some of the 600 employees who were sent out to Australia, who by the way now say they invented OTHR, became considerably well moneyed. KP did not. http://www.dsto.defence.gov.au/innovation/jindalee-operational-radar-network 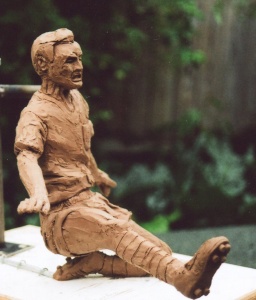 Jim McIlroy was brought over to Burnley as a youth in the 1950s and became possibly their greatest player of the modern era. I am certain George Best would have seen him play for Ireland in Belfast on some of the 55 times he represented his country and Best must have been influenced by Jimmy’s style of play.  https://en.wikipedia.org/wiki/Jimmy_McIlroy Jimmy had affiliated with not just the football club but with the town of Burnley itself on his arrival. He never left the town even when sold down the river to Stoke in 1963 he continued living at Burnley and commuted to Stoke. Stoke was a strange place for a man courted by the big Italian and Spanish clubs (Barca) who refused the lure of big money for the meagre pittance at Burnley because he loved the drizzly cotton mill town so much, he still lives there now in his declining years.

Nearly 50 years after he left in a bombshell revelation that the club had transferred him to a team in a lower division the club honoured him by naming a stand after him. I want them to further honour him by erecting a statue in his honour and I have created a maquette for one for them. (this image is in ‘my burnli’ folder mi pics)Jim remained totally faithful to the club despite Bob Lord’s despicable actions. Lord as far as I am concerned ruined Burnley F.C. when he turned the TV cameras away when Burnley were a top club in the early 1960s in the misguided belief that TV would keep fans away from the ground, in fact quite the opposite was true. http://www.lancashiretelegraph.co.uk/news/11545047.Clarets_legend_Jimmy_McIlroy_is_the_toast_of_Burnley/?ref=mr

I am pleased to say someone high up in BFC has emailed me and asked me to send some photos and other details about my proposed sculpture to him. He added that they have already named a stand after Jimmy Mac, but really, that’s only the cost of the paint job to sign-write his name on a stand that would have gone up already. Nearly every club in the top divisions has had one, two or more scuptures erected to past heroes. Arguably there are few players bigger than Jimmy at Burnley, except maybe Tommy Boyle in the 1921 team which went the longest run at top division level of games without defeat, a record which stood over 80 years until Arsene’s Invincibles!

on a sadder note when I contacted ‘Clarets Mad’ to see if I may muster some support for the idea they got back and told me there’s at least 30 players who deserve some form of commemoration. So, I guess I should shut ma trap whilst I still can. Maybe I should make ma sculpture of my hero in my back garden, like the one of my dad who ran football teams and gave the cricket league a cup when we couldn’t afford cheese to go in our bread! Good old Big Jack Taff.

Maybe because the program was an advert for the forthcoming Tate Pop Art show Sooke didn’t mention R B Kitaj, one of my top 10 artists of the 20th century whose skills far outweighed those of his more famous younger contemporary Hockney whom he influenced a great deal. http://biography.yourdictionary.com/david-hockney

“It is a widely held belief among those in the art world that…Jacob Kramer in Leeds viewing an Alan Davie exhibition in Wakefield in 1958 pushed Hockney towards the type of work that is considered avant-garde. Alan Davie went on to hold a considerable influence over Hockney dramatically represented by a series of ‘abstract expressionist’ canvases that Hockney produced during his first year at the Royal College of the Arts. That year, 1959, another individual that held considerable influence over the work produced by Hockney was American artist R. B. Kitaj. Kitaj’s work was of commonplace scenes as well as contemporary people and events. While Kitaj’s work discreetly affected the British Pop Art movement, it profoundly affected Hockney. Hockney’s keen awareness of the times around him is directly attributed, in many critics’ opinions, to Kitaj.” Encyclopedia World Boigraphy.

Talking of deals Kitaj had quite a raw deal from the media, so much so that a war broke out between him and the press- http://www.theguardian.com/artanddesign/2013/feb/10/rb-kitaj-obsessions-tate-war Nevertheless Kitaj kept a foothold in his adopted London until his death. http://www.jewishmuseum.org.uk/kitaj