Here’s a sighting of ma new Shrewd Idiot book during the binding at Sullivan & Son. 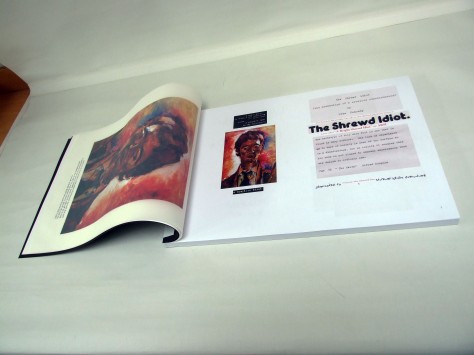 It’s A3 size, that’s with two A4 type-written (By Jill nee Williams in the late 1970s) sheets on each page. There are 13 ‘big’ images at A3 size potted thru the script along with lots oif little doodles and some nice images dropped into the typed pages. There’s lots of alterations and corrections through the document because it was originally meant to be a manuscript to attract a publisher deal. In the 1970s the publisher would take this document and hand it to the typesetter who would follow the instructions which I had put over the type and any which were added by the publisher. This ‘manuscript’ was never intended for public consumption hence the need at one point to go through and change all names when I thought maybe I’d self-publish as a normal book which would be typed into a modern form where all the corrections and changes could be implemented so the viewer never see them. However, I decided not to have it re-typed, that would have made my job a lot easier so it was a must to avoid, NO, better to really really struggle with the original typed pages, scan them in then alter them as required in photoshop then design the layout in Quark (I know, Quark is so out of vogue now and it’d be much easier in Indesign, so I stuck with Quark, you know me.

So, there we have it, the book is now printed and with my binders who have now debossed the actual cover cloth with my little drawing of the Shrewd Idiot pushing his barrow of books, well one BIG tome anyway!

This red image is only half the cover, it sits to the right hand side of the cover making it look like the fool is pushing his barrow off the book.

Everything about the book is not exactly what it seems at first glance. It looks like a story about a young bloke who left his home town and travelled as far away as he could to get an education and how he was initiated into all those things young fellas need to be initiated into. But it’s not about that at all. It’s about awakening, awakening of consciousness and the acquisition of skill to carry the revelations that an awakened consciousness finds in a pretty uninterested world. By the end of the book the idiot has a lot of disappointing outcomes but they are just more revelations about how hard life can be especially when you have a penchant for making life difficult or finding the hard way to do the easy things.

In the end the book is not about that fella back in the early 1970s, it’s about his older version now in his mid-sixties and how he never gave up on his dream of showing folk the quality of what he found in all those initiations and revelations and how it took more than forty years to bring them out in a public format. You’ll see as soon as you open it that it is not what you thought it was as the opened book shows, it has a beautiful feel to it and again that’s an acquired sensibility from over 40 years of continuous effort and striving to achieve.

And the best is yet to come because this is just number one in a whole series of publications which this guy has been preparing over the past. But there’ll be no more quite like this, I’ll find easier ways to do the design and layouts. Watch this space.

The book plus a sister publication of 37 A3 images should be available by the end of February 2017 and hopefully a facsimile publication of the famous concertina ‘book’ called ‘Appleheadman Screams’ which I did in 1972. Nothing has changed, the things he screamed about are still going on…and on…and on. Apulhed shows a perturbed visage but he won’t accept the original face of Apulhed when he saw mankind’s inhumanity all over the planet Earth, he decide that rather than flee this realm he will stayy to spread happiness and compassion, slowly but surely he knows that humankind will return to peace.

I am doing a launch Performance Art piece at the Arnolfini during the BABE book event on Saturday 1st April. Watch out cos that’s not what it seems either, whereas if you can get to it you’ll see what looks like a Clickerti-Clix year old bloke prancing about with words and masks and dad-dancing (not! I do Zumba once a week don’t you know), it’s really an introduction to the Shrewd Idiot book with all its ins and outs. More about that in my next blog.