As I prepared for it I sent Peter Donaldson, the joint owner with his wife Sarah, some information which he may be able to use on his own social network to advertise a show in his gallery. My idea was to scan thru the pages of past observations made by professionals and public on my various exploits in Colchester over the past 20 years. I knew I had had two big shows, 1994 and 2000, but had forgotten some of the stunning remarks that have been made. I don’t know what Peter chose to use yet, but I decided to put them on my blarrt, so my readers, who are not that many to make it a ‘public’ domain, (believe me at present you are a pretty [well at least not ugly] select group). That being the case I have taken the liberty to use one or two comments which were shared to me in reaction to various recent works. I do hope that none of the people who made those (wonderful) comments mind me putting them out there? I just wanted to show anyone who looks at my work and feels, somehow, they find it to be good that they are not as alone as they may think. They are in good company. And that is a source of great joy to me because those who know me well understand that the flourish and flair that you see in my output did not come easily. It was 90% effort and 10% innate talent. (My grade at GCE art in 1966 was level 6, just a scrape of a pass. It was my worst result except in maths. So, being an awkward son of a bitch, and not having a chance as a mathsmatritionist, I chose to pursue a career in art, fool that I was, when really I could have been a geologist as I got level 4 in that. I never made it easy did I?

So below are the words for my poster/flyer, followed by some comments.

Word & Spirit, an Exhibition of Books

(and related stuff) by Pete Kennedy from

Six ‘words about the mystics’ vinyl banners in mind blowing colours hang on display alongside Pete’s clay pot with words embedded around the neck from an ancient Indian poem by mystic poet Kabir with six scrolls inside (a reference to the ancient tradition of keeping knowledge safe by hiding valuable manuscripts in pots). Six etchings of six mystics will be on display on the wall.

The unique pothi ‘book’ on clay tablets will be on display (but not for sale) with a cardboard- concertina book of the words from the clay pothi (available to buy).

Pete’s year-long notes and sketches for the unique handmade book ‘Inside This Clay Jug’ (nfs) will make up the boxed ‘Enbuk’ (for sale) comprised of six comb-bound A4 books in the style of Dieter Roth.

Some back stories about Pete, his work and previous Colchester shows:

1994  Ray Rushton, renowned critic in Essex forestalled his retirement and wrote about Pete’s exhibition at Colchester, Trinity Street Studios:  ‘Here is a lively set of exhibits with the artist being so linear dedicated that the division between drawing and painting falls into oblivion. It is open black line throughout-whether depicting, in lounging energy, his hero Feliks Topolski (naturally) or members of his family…But perhaps the best oil here, ‘Pol with Cats and Roses’, is also the only true painting in which line and mass are equally spread. The grey cats in particular, are finely modelled …’

1998 June, Miriam Patchen, American poet Kenneth Patchen’s muse & widow wrote, “What superb drawings…(they) are strong proofs of your special quality as a meaningful artist.”  Then in August 1998 she wrote, “Apul-One is a marvellous tour de force. Your spelling is a wonderful way of helping people not to slide over words. This is truly delightful slowing the reader so he’ll think a bit. Teaching and writing! How do you manage both?”

2000 Pete was chosen as Colchester Library’s First Millennium Artist Exhibitor with his ‘Nonogon Story’. Opened with a dance featuring music designed by Pete and composed by Mick West & Mark Newby Robson in which 13 children danced the parts as Pete read the story. After that a multi-media exhibition of masks and Nonogon Character art ran for 3 weeks. Inez Bain wrote in the visitor’s book:

‘This would be superb material to take into schools, theatre visual workshops etc! Definitely brings out fun yet could send positive messages to youngsters- to images they would identify with- it’s wasted in library only!

2001- ‘I was impressed with the scope and ambition of the project. You have clearly spent a great deal of time researching and developing the project and there is much that would work well in a television drama. ‘Comment on Pete’s Nonogon Play script from Gemma Few, BBC Drama Serials.

2013. ‘I received your package yesterday, with the beautiful G BATCH. I look forward to reading it at leisure, but the production is wonderful.’ Nancy Campbell, artist book maker and poet.

Burkhard Quessel, Curator, Tibetan Collections at the British Library said about G Batch, ‘I have found and opened it now and must say that it is really quite a beautiful book.’

Ian Walker, an old school friend of Pete’s teenage year’s said recently on receiving a report about the ‘Talk’ given after his MA had finished, “Great photos. It sounds to have been a very interesting event. I would have loved to have been there and to have seen the reactions of the audience.  The photo of him sat down with his masks around him took me back to our youth – his “far away face”. His wicked smile. His “sod you I don’t care what you think about my work. I know it’s good.”  Pete is Apulhead. Apulhead lives!

The internationally respected artist’s book-art’s exponent David Jury said of the article Pete wrote for the Artist’s Book Year Book 2014-15 (ABYB UWE Bristol) published in October 2013, ‘Your article is a remarkable documentary; lucid and unaffected, despite the fact that it records, in some detail, an impressively intellectual endeavour.’ 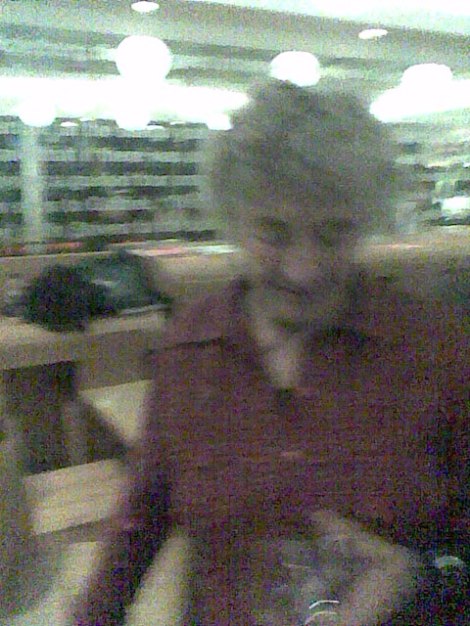 lucy on my mobile

Finally, last but not least, Lucy Lippard, much renowned USA critic,  commenting on a new article Pete has had accepted for The Blue Notebook  Spring Edition 2014 wrote, ‘I just got the article which I found lots of fun. Look forward to seeing your books in the flesh at some point.’

Last night (26.1.14) I was watching the Review show and what was being talked about stirred me up, emotionally. Forty years of  being rebuffed ignored condescended deflected by the ‘art world’ came soaring up to the surface and I got straight onto my blog and blarted. I must remember not to do that in the future, i must try to put some space between my viewing things and my reaction, to calm the vituperance which has gestated in me over the past 45 years. I recall Seamus Heaney saying that we need a job and poetry is the thing we do, if we are lucky, as a blessing. In my life, it was teaching that I did plus a number of other jobs which kept the wolf from the door and then I did my ‘arts’. I do believe you need to get out there and do things in the real world to gain insights into it and learn how to communicate with real people. Anyway, that is all behind me now. I can and do concentrate all of the time I am not doing yoga, tai chi, zumba, light gym and sawing wood for our fire on ‘art’. I do think however if I had had some work ‘accepted’ or ‘bought’ over the past 45 years it would have helped to generate more. Like now for example, I cannot really afford to go do ‘print’ or even make books to the spec I set myself. Maybe that’s good as as always i have to be ‘creative’ in working ways to be creative.

I am trying hard to get out onto a circuit doing my ‘talk’, so watch out art colleges etc, I’m coming at you with my lance and my trusted companion Sancho Panza on my wobbly horse what I stole from the set of Warhorse!

so Don’t read any further if you are of faint heart or dislike whingeing poms! Addition or Postscript:

This evening I watched the review show which I never watch much (wachmutch?) and they were praising up the new martin creed show at Haywerd. They were talking about how he won’t get stuck in a box or a hat, how he keeps his media wide open and turns from one to another etc. And I sat there and I thort, well isn’t that the very thing I done fer farty yearns? Isn’t it exactly that the ‘Arts Crownskill’ criticised about me, the fact I couldn’t be categorised or boxed or madhattered? In the 70’s! and in 1999 I designed my Nonogon show which used so many media, including films created by Field Merrijeff and dance choreographed by that girl who did a scene in bed with Harry Engfild? With music I designated and which was created from my directions by Mark Newby Robson and Mick West. Have not I been thur and gone and done it, many times. But when I ask the tate or any other gallery to consider me as a contributor they say, after long consideration please re-arrange this well known fraser or shaying, “Off ferk.” I’m still not bitter, I’m a budding bud-hist and I don’t imbibe.

3 thoughts on “A change in my habits- I am giving good notice of an event, for your diary.”