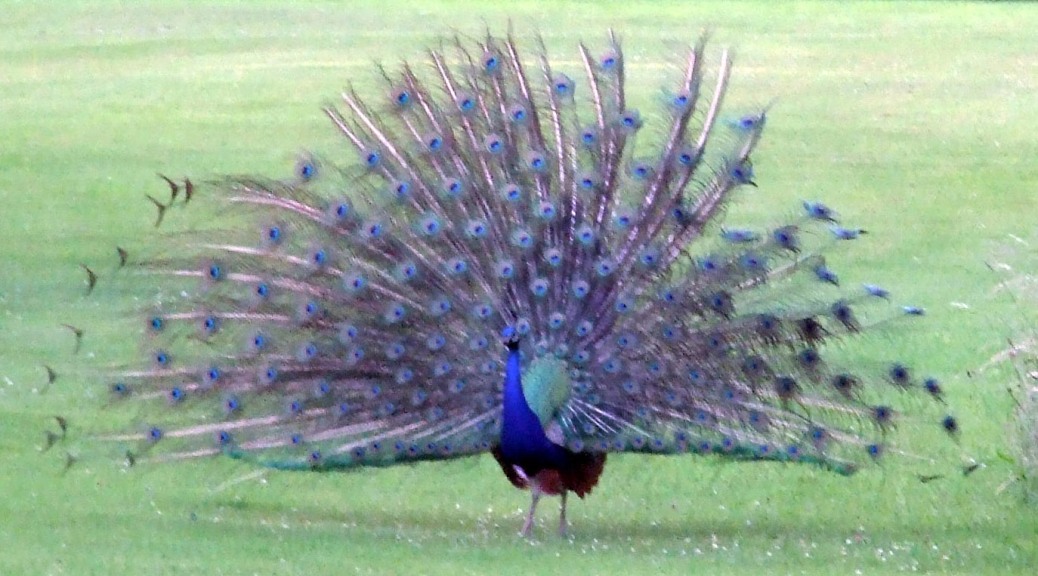 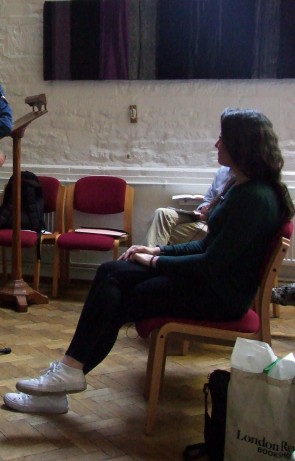 Dr. Kayla Rose said, “I want to take this opportunity to thank everyone for their participation at Making Beyond Words at Corsham Court [Bath Spa University] this past weekend. It was a great day for us, with an incredibly high standard of work from our speakers and exhibitors, as well as fantastic engagement from all who attended.

Creativity and collaboration are at the heart of what we do here and we are inspired by your passion for word, image and concrete poetry.” and

“Thanks to Michael Pennie, who, along with Fiona Cassidy, put together an absolutely fabulous exhibition.” 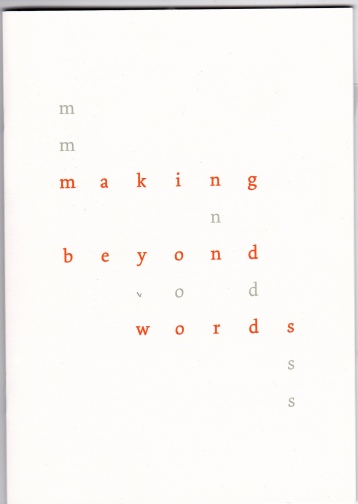 I loved the wonderful programme booklet designed so exquisitely by Matthew Robertson & beautifully printed by Ripe Digital. I adore the way the numbers have been placed on pages, will use that in ma work one day. I love the black, grey and orange used to print the words and the layout with all the white space. Quite simply, it’s beautifully designed. 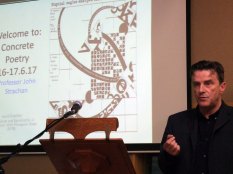 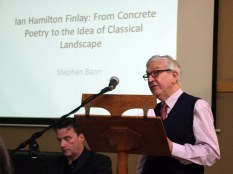 It set the scene as John Strachan opened the symposium and Stephen Bann delivered the Keynote lecture on the late Ian Hamilton Finlay’s work in Concrete poetry and other forms. https://www.theguardian.com/books/2012/nov/16/ian-hamilton-finlay-concrete-poetry

The following day was full of good talks, the great exhibition in which was my poem cycle ‘Inside This Earthen Vessel’ letterpress printed by David Jury and referred to in the programme by Michael Pennie amongst ‘the other treasures’, [thanks Michael, and Josie Reed and Fiona Cassidy for the hanging with the lovely cover page looking like a nose!]

Our prints were hung alongside some of the ‘greats’ in the field including Dom Silvester Houedard, ‘…the leading theorist of the concrete poetry movement’ and b s johnson, what an honour.

Now let my photos take you through the days;

‘a poet is someone…

whose art matter is LANGUAGE…

communication by the ‘langue’

by any means WHATSOEVER.’

[Which would by corollary include spoken word or even sound, like the sound poems of Henry Chopin & Kurt Schwitters. /sonic experiments like http://avant.org/artifact/liz-phillips/%5D 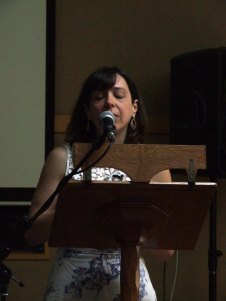 Viviane Carvalho da Annunciacao talked about the work of  The Noigandres group in Brazil and its relations with Scottish poetartists like Ian Hamilton Finlay & Edwin Morgan. [The Noigandres group, which takes its name from a neologism* found in an Ezra Pound poem, was formed in 1952 by the Sao Paolo poets Haroldo de Campos, Augusto de Campos, and Décio Pignitari. * a newly coined word or expression.] 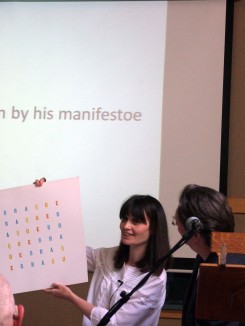 Talked about Houedard’s collaboration with students at Bath Spa uni. On how she has found some of the beautiful work done back then tucked away in people’s garages.

I had a nice chat with ‘Mitch’ before he spoke and it turns out he values the work of Henri Chopin https://www.theguardian.com/books/2008/feb/05/poetry.culture    whose work was beautifully displayed at Firstsite in Colchester some years ago. Mitch thought that Ingatestone is out in the sticks like Camulodunum but I informed him that no it’s a Ingatestone’s throw frae Londinium.

He gave a great intro to the work of the much missed at this symposium John Furnival which has come not a moment too late to flag up the need to rescue so much of the work done by the early practitioners in Concrete poetry and related media.

Whilst Chopin was creating his merveilleux (marvelous) Typewriter poems (also known as dactylopoèmes) Furnival & Davies were making ‘Feelie Boxes’ which are kinda scary cos they put stuff in boxes into which you couldn’t see but were asked to place your hands to discover ‘things’ with differing surface texture. There was nought sinister about em, they were in fact reminiscent of surrealist boxes like those of Max Ernst and Joseph Cornell (who died in 1972). Furnival & Davies also collaborated on electro-acoooustic music and unusual score-sheets after the style of John Cage.

My immediate feeling for music of any kind is that I love to hear much of it but am no ‘player’, however Cage mage it possible for anyone to ‘make music’. [Did you know that Velvet Underground’s John Cale spent time working for/with Cage?]

I missed the Roundtable discussion because I exercised my right to go out for walkies to a second hand shop I saw the night before and I bought a beautiful Corgi toy car model of the Vanwall racer http://www.grandprixhistory.org/vanwall.htm which Stirling Moss drove in when I were a youngster. As I walked down the road I thought to myself that exercising this privilege was not my habit in my college and school days, but I wished I had, then I may have missed many a boring lecture some of which are mentioned in my new A4 Shrewd Idiot book which is about my student days from 1969-73 exactly coinciding with much of the early work discussed and treasured by this symposium. I was touched, nay tainted, by many of the influences that the early concrete poets were looking to. [I had to mention it (A4SI) didn’t I, cos I can! Much more about it in ma next blArt. Like Neil Young, “I’m still living the dream we had, for me it’s not over.”] 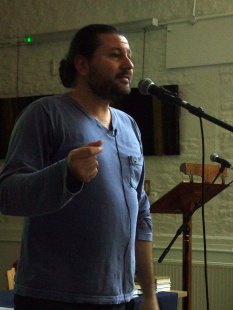 Did a great talk assisted by his own song and constant movement about the influence of Concrete Poetry on popular Brazilian song. I loved his solo rendition of Palavra Nao e Coisa. I took a copy (which am yet to pay for, it’s very good, am hearing it for the first time right now, then I’ll get in contact with Leandro to settle up) of his Palavreio cd on which he shows his virtuoso skills on instruments, voice and electronics. I’d like to get access to those footpedals he uses, one records it live the other puts it on repeat and projects the sound…wow, let me get my hands on one of them!

I’m afraid I am going to flash thru the last couple of talks as my time has run out.

Did an interesting talk on how the maker & audience might become an object among objects…’ and how his poem, A Game of JUG is influenced by the image-text-ground playing field of concrete.

Did a talk on how he walks the ‘urban Edgelands’ and has created WALK-‘Walking, Art, Landskip & Knowledge’

Gave us more info about subtle use of positioning words & white space on pages of books to create different interpretations.

As I had a heads up from John Strachan that Tom Clark (Thomas A. Clark * http://www.scottishpoetrylibrary.org.uk/poetry/poets/thomas-clark ) is ‘one of the best’ I took notes during his talk.

‘writing is a fluid ongoing activity, making is a static process’

He shows a four line poem, ‘distributed or constellated in space which can enter intimately into the whole sense of the poem’, then he shows ‘extensions of the stanza break(s)’ with ‘space & Time for perception’ where ‘the (white) space is of value’. So we see two double page spreads with the firsthaving a blank page left and the four line verse top of the right hand page, then the second spread having (say) a six line verse to left and a 3 line verse to right side.

He then showed a book with a poem in which comprised double spreads with just one word to right hand page, ‘flowing’ and the poem was about a river which flows, indicated by one word every other page.

“My (Moschatel) Press has been an investigation into presentation as an aspect of form.  A book is as a glade, a bright space in a forest.” He mentions his publishing of post card(poem)s. Talks of the no need to ‘Blow a whole poem up big on a wall’ Because, ‘You only misunderstand the opportunity…No…Only use small texts’. I think he means that postcard size is just as, maybe more, powerful than making BIG for the sake of it, just because you can.

“In 1973, with the artist Laurie Clark, he started Moschatel Press. At first a vehicle for small publications by Ian Hamilton Finlay, Cid Corman, Jonathan Williams, Simon Cutts and others, it soon developed into a means of formal investigation within his own poetry, treating the book as imaginative space, the page as a framing device or as quiet around an image or a phrase, the turning of pages as revelation or delay.

From 1986, Laurie and Thomas A Clark have run Cairn Gallery, one of the earliest of ‘artist-run spaces’” Scottish Poetry Library.

Then John Strachan invited Christina Slade to close proceedings and we had to scarper the premises so that the peacocks could return to their peaceful haven uninterrupted.

Sadly this ancient resident was trampled underfoot in the haste to leave.

(Photo of Michael Pennie & Fiona Cassidy is not mine I am grateful to the Net for it.)

Altho Michael Pennie did not speak from the front he spoke eloquently in his selection of the works on display in the beautiful exhibition [which must be the shortest lifespan of any I have ever witnessed (about 2 hours)] and which Fiona so ably assisted with the hanging.

I was so happy to see David’s wonderful letterpress prints referred to in Michael’s note in the programme as one of the treasures. He also made very affirming noises about the bound copy of the prints which I was showing Josie Reed. Thanks Michael, and Josie for suggesting our work to him.

Finally- During one of the morning talks I saw a slide which showed some old letterpress prints in which the maker in attempting to illustrate how the ‘sublime god displaces man(kind)’ using ‘disorientating typographical design’ had created a diagonal dagger like shape in a piece about, ‘the panther profecy’ (his spellin). I saw an incredible affinity between that print and the one David Jury had done of my Beuys Poem in our collaboration, Inside This Earthen Vessel.

David created the diagonal on his set up using a metal rod and he sawed the wooden letter in two to add to the concept of the jug being split asunder as it hits the floor a direct comparison with Beuys’ alleged crash. I was happy to see Josie Reed also noticed in the same panther page a synchronistic link to my Earthen Vessel analogy in the words ‘a Potter’s wheel’ printed some 100 years ago.

And thanks to my long standing friends Gus & Linda Fraser for once again giving me a place to stay so I could attend this wonderful event.

IF you are in the Colchester area this Friday 30th June come and  join us at Firstsite gallery at 7.15 pm. I shall be reading a new poem based on my Appleheadman Sees screenprints from 1972. You’ll see that not much has changed, same old same old song of woe song of innocence song of hope.http://www.firstsite.uk/whats-on/reading-music-evening-educaid-sierra-leone/