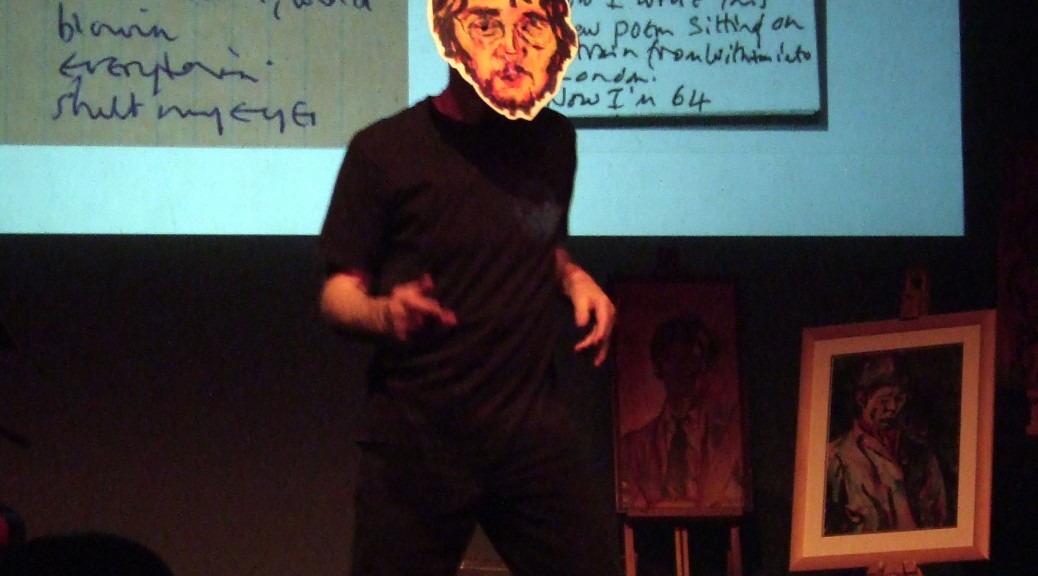 It was not just a Book Launch, it was my 67th Birthday Celebration at Colchester Arts Centre (CAC) on Sunday altho’ my birthday is 27 Oct we had decided that Nov5 is an easier date to remember remember. As it turned out we forgot to celebrate ma birtdae, altho’ my wife did send a cake to CAC which my guests enjoyed. I was too busy clearing up the stage area so the next act could set up..

Anthony Roberts gave me the invite to Launch on seeing a copy of my The Shrewd Idiot book and he also gave me a beautifully phrased introduction yesterday which made me feel real good!

The Performance Art gig I did just grew and grew in the weeks (nay months) of prep as I got more excited on its approach. The idea which underpins my PA gigs is to bring my static 2D, 3D and BookArt forms to life, to have them walking and talking and most of all DANCING to celebrate life, theirs and mine!

CAC gave me the best facilities I have ever had access to and I am very very grateful for that. Neil Thorp (the man detailed out by Mark Senior Techie who left the country on seeing my scrip) to do the Techie work was very helpful and patient with this first timer. He accommodated my script and its being crammed with different ‘tracks’ of music (which I had edited down in Audacity to give my story a running musical accompaniment appropriate to the story line and of course with a dance beat I could move to in what one of those present has kindly called ‘dad dancing’) and different ‘slide changes’ on a powerpoint I never had intended to use but it was apparently the best way to coordinate the sound, vision and lighting schedules. Ben Howard it was who organised the provision for my gig and gave me encouraging words in the weeks before. Anyway the outcome was tremendous as I looked at the stage before the crowd was allowed in.

Although I had a poster printed on yellow paper (A3,4 & 5!) and got it distributed around Colchester, even at the Town Hall, there was something lacking in my promotion of the gig as all those who turned up already owned copies of my Beautiful Shrewd Idiot book. I did mention it (hundreds of times) in my blArt, posted a tweet about it and the lovely Daphne Sandham at Colchester Art Society put up a mention of it in her weekly newsletter to members and she retweeted my tweet. They came to see if the man in the book was for real. Well, in the book he was 18-23 years old between 1969-73, in the process of becoming an artist & teacher whilst being tamed by 3 lovely women in those years. Yes he does exist but a bit older now and not necessarily as good a dancer altho’ he did attempt to disprove that fallacious, rather libellous, definitely deleterious theory to cries of ‘dad dancing’ called in mock humour.

He also exhibited some salacious stories about his former self(s). Some of his creations ‘came to life too’ well one did, Apulhed, whose appearance was indeed the highlight, an opinion unanimously acclaimed by the audience.

Here’s some images of the author dad-dancing and not caring about the consequences (in fact some of his moves were perfec Zumba).

Here’s the Emperor Rosegon Dance Competition in full swing. The judge was a bit biased! I admit now I should have come 3rd not 1st, but whose birthday and whose gig were it any road up!

One of the best things which arose from the gig was a beautiful informed review written by Gary Malkin of the Artist’s Book Archive at Baltic, Gatesheed. I’ll ask his permission to post it next time as he gave great insight into my books, particularly The Shrewd Idiot, Christine Dixon created two beautiful handouts for the gig which I wish I had used in the advance publicity. She also came up on stage to grace the floor with her dancing skills as I reminisced about my chat up lines from the 1970s! Thank you Christine. Thanks also to Dave Doughty who acted as the Taxi Driver and the film maker. I hope to post the results of his efforts in the not too distant so you can enjoy ma gig at CAC.