Ok so I went to Dave McKean’s performance and discussion of Black Dog at Tate Britain. I’m afraid I ain’t got the time to give it a truly full and gripping report which it deserves as my life is busy, getting busier, so to catch up I am going to bring in some images from that gig and just make short notes. It were wonderful to see the images from the book big up on screen and the light that shines thru makes them even better than on the printed page. I hope D McK don’t have any problem with me putting his images up on my blArt, I do it with the best intention and it will bring the stunning quality of his work to a few more folks.

This is my portrait of Dave McKean, I have him sitting meditating above a cloud holding the kingfisher’s egg with the big old moon which was in the sky early November.

Dave showed that he is also a composer as he played the organ in this concert with his incredible coelacanth zeppelin image.

Matthew Sharp sang a lot of the lyrics in his wonderful baritone (?) voice. 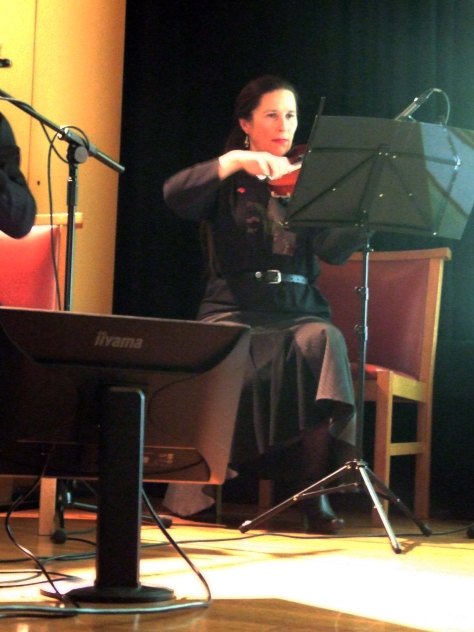 The battle of the Somme began with one almighty explosion which was heard across the channel in London. Dave’s dragon takes a pretty dull thud and makes it both exciting and menacing.

Nature still continued to appear during the trench warfare and here D McK highlights a robin. 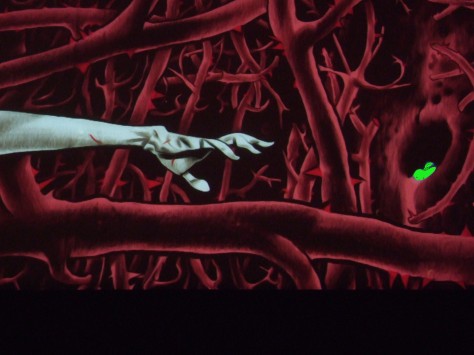 In his graphic novel he had a hand searching for a kingfisher’s eggs and I added my character Apulhed to the score! 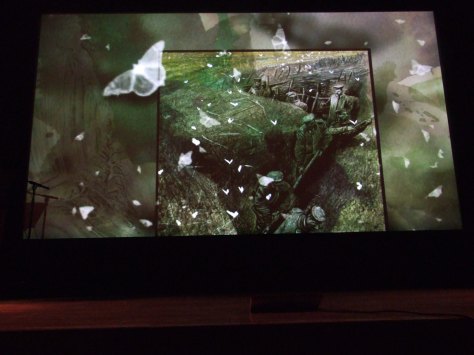 Butterflies make a welcome break to the shrapnel flying at the entrenched soldiers.