Real & Imaginary Rainbows in MY life.

This one is a few days old when I photo’d it emanating from ma chimbley early one morning.

I love old comic books. Tiger Tim was great but my personal fave was Toby Twirl. The illustrators were the first great artists I was ever aware of. I was lucky as my parents could not afford to buy me them so I yearned so much to have them that nowadays, when I see them in various shops, I try to buy them. I keep on forlornly hoping that the skills will rub off on me, am still waiting. Of course I’d never do a ‘comic’ comic like they were but I do intend to re-visit my 1976 ‘graphic-novel’ Applehead Lives during 2017 and re-do it using the skills and technologies am still picking up along my merry way.

Today I want to take you back a year to 2015 from 12 to 24th of October when I was on a lifetime best experience in any form of art that I have ever involved with.

Workshops run by Jurgen Fritz (‘JFr’) alongside others by Vest & Page (‘VanP’), which ran simultaneously, changed my approach to my Performance Art (PA). I doubt I shall ever come across such good quality inspiration again in this life. JFr and VanP were great team leaders and their respective teams were packed with people from around the world, many of whom had considerably good PA to bring to the 12 days of intensive workshops and actual PA gigs around Bristol; market, harbour and art gallery. I was privileged to both witness and participate in it and what I learned there fed into my PA part in Firstsite’s PA Day in November 2015.

The sessions gave me confidence to pick up my PA from where it had arrived and lift it to new height. It’s not for me to say how good or bad my output is, that I’ll leave for you & others to decide, but my 3 mentors gave me a will to carry on and carry out my PA with a renewed determination to be original, different and also to pay tribute to others who have gone before inspiring my work.

So today I am going to talk and show about some of the performance art I saw there done by some of my fellow participants. Altho’ I love all three of them I’m not going to talk about JFr and V&P cos you can find their work by just googling em. See- http://www.veniceperformanceart.org/index.php?page=255&lang=en

I’d like to go into some detail on Anna Kosarewska, Jamie Burr & Carol Montealegre, (I’ll get round to doing a blArt on Debbie Guinan and Robert Hardaker a little further in the future. )

All the photos were taken by and © Jurgen Fritz 2015 unless otherwise stated.

Anna did some real beautiful PA during our time doing the course. Her best piece brought us all to tears as she commemorated several friends who had been killed during the invasion of her home country recently. PA can be a most powerful way of bringing issues into the public domain. Everything she did she did with consummate grace and care often covering her face with cloth or some other material.

I loved the piece she did in the harbour on the rail track in which she used little toy soldiers. At one time her presence nearly caused some of the local workmen to have heart attacks when she refused to move from the track and a train was approaching albeit at a very slow pace, but it didn’t seem ready to halt, and she was lifted to safety by two of IPA’s organisers Eva & Fay. 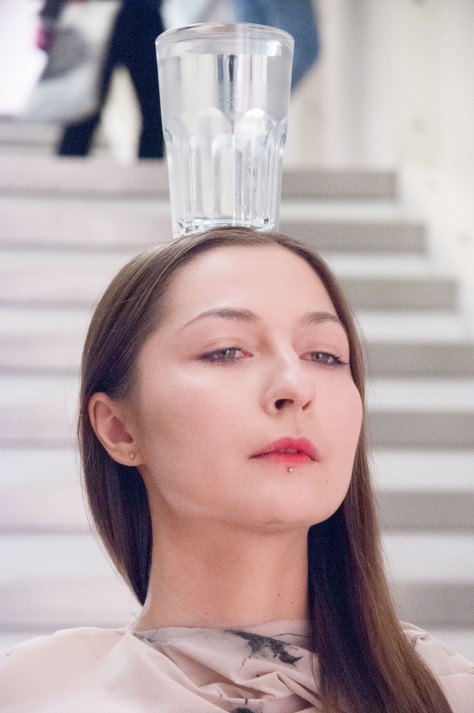 On Saturday evening she did some acts balancing glasses filled with water and walking dreamlike around the stairs.

Jamie did some very moving pieces. His gig with bales of hay and a pitchfork on the harbour was gripping but best of all was his one done in the garden at Dunden where he covered himself in sloshy mud and threw water on himself from glass jars. I know that sounds stupid but it was quite incredible. Reality was suspended and I became one with a strange world Jamie established between the field and a willow den. He had set up about seven jars filled with water. About 200 metres from the den he had buckets with mud paste in them which he applied liberally to his naked body. Then he ran, followed by the whole lot of PA participants and leaders, to the den. 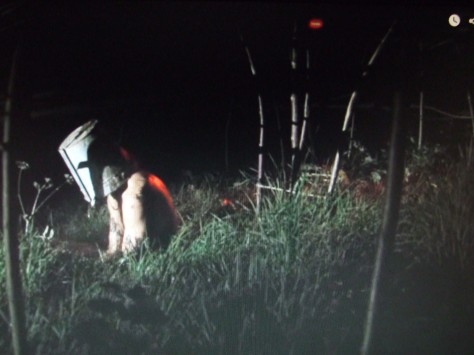 He entered it and sat inside a few minutes, then picked up one jar, walked out of the den and doused himself and walked back in and sat again and did it again and again until the jars were empty and steam was rising from his limbs when he ran into the building to shower and dress himself again. 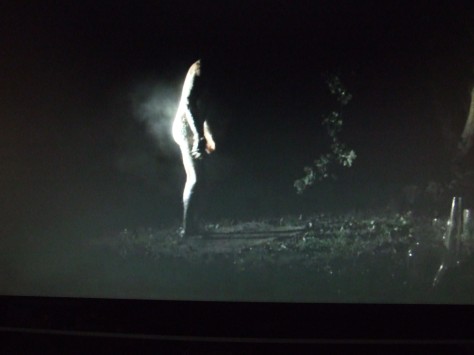 Carol comes from Colombia, she brought some exquisitely lovely PA ideas with her. She had these ideas like using twigs which I have seen being used by some of the big names but Carol had a special touch of her own. I loved her use of black face paint, lace on garments, leather so much so that I began to use it myself- face paint that is and my first use happened to be black (it would have been gold if I’d not first painted a Zorro mask on!) in my Zorro & Beuys+Dead Woodpecker-poem PA at Firstsite last November. 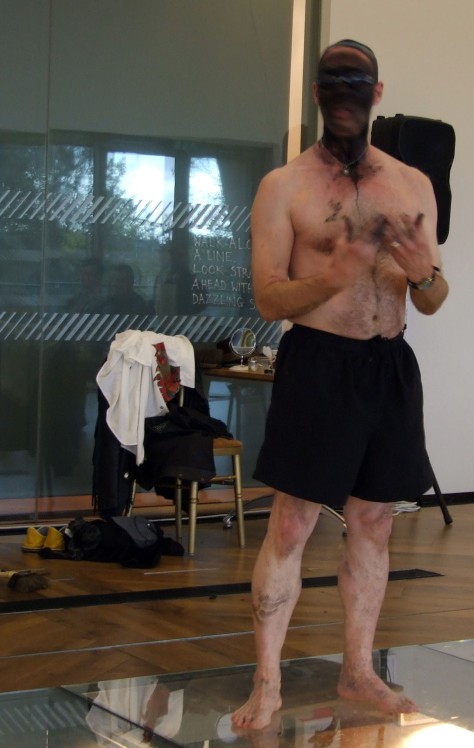 This photo were taken by Priscila Buschinelli (look at the eyes!) 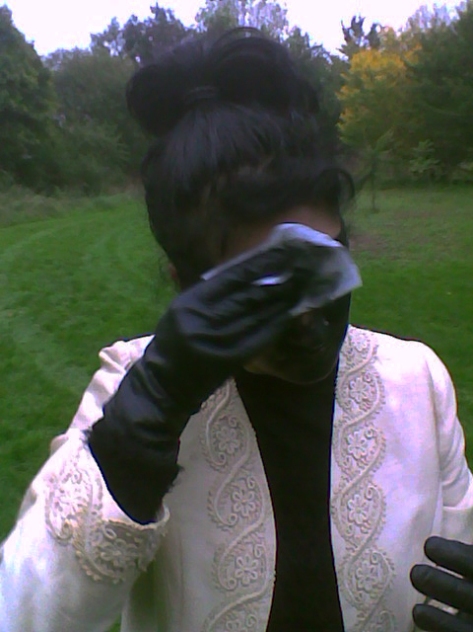 But I didn’t look as good as Carol, no way. I loved the piece she did one evening as it turned dark where she blacked up and that made her teeth and eyes really stand out. She used black balloons too

but with much more beauty. Carol had brought along small props which she would drop into each of her pieces with aplomb.

Influencers of my own work.

Alfred Jarry, G I Gurdjieff, e e cummings, Kenneth Patchen, Ken Campbell are some of my biggest influences, if I can call them that. Then there’s dances by Michael Stipe of REM and Tim Booth of James, plus Samuel T Herring of Future Islands, all of which I love.

I love the way Picasso, Topolski and Japanese Zen Masters draw in front of folk.

Masks from other cultures and my own creations in the past. These are a few of my favourite tings which you’ll see pop up in ma new PA gigs. I have been told I can do 10 minutes at the next BABE book fair in Bristol’s Arnolfini gallery in April 2017 so watch this space for development.

I shall be:entering with attitude, dancing like an Idiot wearing a Tea Cosy, drawing on the zen master’s, wearing a new Shrewd Apulhed mask and costume and, if yez aks him nice & kindly he, may do a gentle, meditative dance and do an Apul-zen* drawing himself. I am going to ask some of my friends at Benton Hall to help with the choreography.

I like the possibilities! I have also gotten a new take on my old frend Apulhed. Someone in Ghana has ‘borrowed’ the idea of Apulhed and produced lots of T shirts and tings thus illegally tampering with my copyrights. I created Apulhed way back and reserve the right to call it mine. Similarly I am now creating new ideas to play with in my ‘Apul’zone, so leaf them alone.

Finally I saw more rainbows on my horizons: