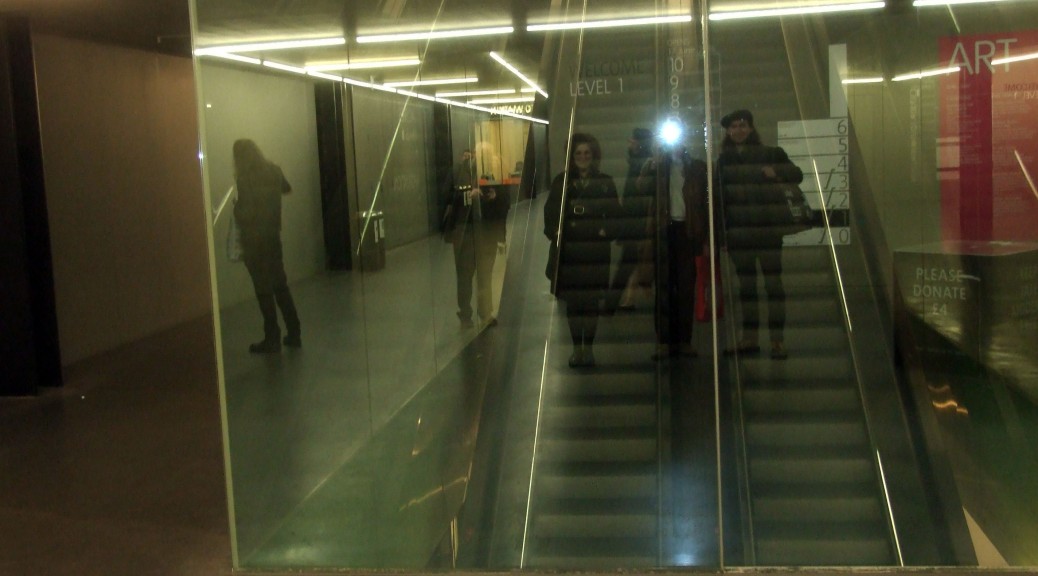 I headed up to London cos I needed to find Quark in order to iron over some of my concerns about a lack of contact details, it’s very hard to find out anything to do with the functions and possibilities of their package. Fortunately the man who came down to see me when I discovered their offices proved very helpful so I shall probably plough on with it.

The other reason I went to London was cos Laurie Anderson was scheduled to be at a showing of her film Heart of a Dog. We had some difficulty getting there, partly cos I headed off t’ward Tate Britain in the rain (It’s not an ‘age ting’ it’s always been like that, I spent most my life heading off in the wrong direction or up the wrong path!) and the gig was at Tate Modern.

It’s her take on her pet terrier Lolabelle’s death and on dying in general. It’s not morbid in any way and in fact she pays a discreet tribute to her late husband Lou Reed, playing him singing as the final moment in the film with a lovely dedication. In fact it’s about finding love, particularly that of her mother, and accepting (or accommodating) death. She also talks of being “in the gap between the moment which is expiring & the one that is arising”, a place akin to where the Buddhists ‘bring the scattered mind home’ in their practice of ‘mindfulness’ where you can find calm abiding in which ‘all your negativity is disarmed, your aggression dissolved and your confusion slowly evaporates as the awareness of clear seeing awakens in you’ through time spent in quiet meditation.

I believe that Laurie Anderson has visited these spaces over a long period in her life and those of us fortunate to watch and listen to her work can be drawn towards her peace-full places. 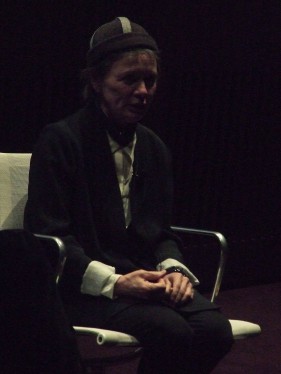 You can listen to about 2 mins of it if yu go to this link and scroll down to “Watch the trailer”: http://www.tate.org.uk/whats-on/tate-modern/film/laurie-anderson-heart-dog

It gives a brief impression of the lovely narration Laurie gives all of her works. She really does tell the tale so well. 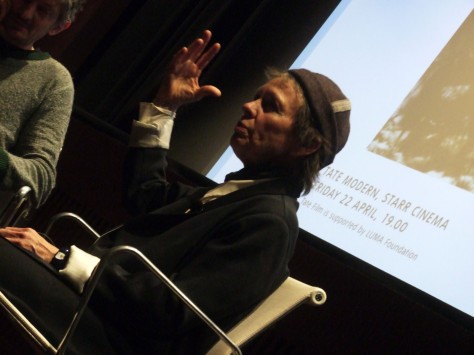 We were ushered in and luckily placed on the very back row. It is a beautiful piece in which Laurie narrates the tale of her adopted dog in its last days, which gives her an opportunity to mention at least two Rinpoches whose advice she seems to access. (Rinpoches don’t seem to come down my neck of the woods but I am sure they hang around in Laurie’s.) [Hey do a sketch of Rinpoches in Lorries! consider it done, it’s all in me mind! In fact I may already have done it without really knowing that I had. I created a 3D work which I call Lorryhead, which is a Buddha with a lorry cab for a head.]

About 12 years ago I bought a cd of her 2001 reading The Body Artist by Don DeLillo in which she employs her mesmerizing and soothing tones to read his book. I never got to the end of the 3 hour piece cos I rarely stay still that long but now I shall return and listen to the end. She always seems to have an aura of expectation in her vocals, as if something is about to occur and if it already did there seems to be an expectant or pregnant ‘looking back’.

I was fortunate to be able to take a series of photos from different vantage points which I said to Laurie I’d like to use in ma blog if that was ok as I handed her my card so she can come in and see this ting and she replied, “Yes you can, do that”. And I will.

I prevented the flash operating in all my shots so the images don’t have sharp highlights but most importantly nobody got upset or distracted by my flashing. Jumping Jack No Flash they call me.

There’s one or two images of her I’d like to use to paint her portrait but it’s unlikely to happen nowadays as I am a Performance Artist and Bukman Blogga Bloke norra oil painter of the auld skool. But you never know.

And then there was Chiara Ambrosia’s ‘question’ which was more of a statement of affirmation of Laurie’s film and it impact on the emotions. Chiara started and so she continued until she had finished and it seemed to tickle Laurie. 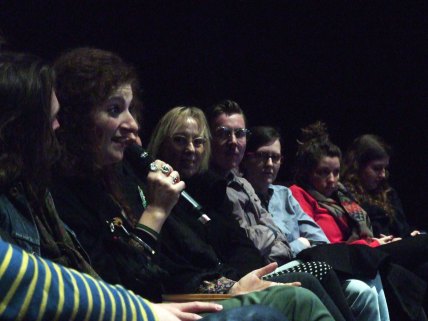 Afterwards when I congratulated Chiara on her ‘thesis’ we realised we had met before and that she was well into bookart as well as film. I got this incredible shot of us standing in the foyer at Tate with me looking like the man with the light for a head.

I have loved Laurie’s stuff ever since I first heard her do Oh Superman and this vid encapsulates her in all her glory: 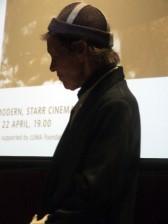 Thanks for the great gig Laurie and thanks for saying you don’t mind if i use the images of you.