Sunset on the old me, am ready for a new dawning. Once upon a chime I wer just a artis-writa, now am heading fer new pasteurised.The eyes have it in this pic: 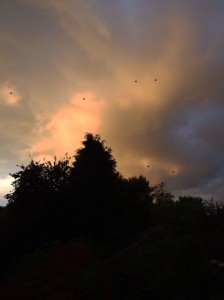 and my art-tickle about my German gHosts should come out in JAB in the next couple of weeks.

I congratulate the teams of Northern Ireland and Wales on finally reaching the final stages of a big tournament. For wales it’s been 58 years since the great John Charles led them to the world cup finals. At the 1958 finals NI got to the quarter final stage with the great Jim McIlroy in the team. Billy Bingham who was in Jim’s team was manager of one of the 80’s teams. Incredibly when I was born in 1950 I was named after my father’s favourite footballer Peter Doherty who managed Jim’s 1958 accomplishments. http://www.lancashiretelegraph.co.uk/news/11421055.Clarets_legend_Jimmy_McIlroy_gets_1958_World_Cup_cap/?ref=var_0

In the 1980s NI got to the quarter final again this time with another Burnley player leading the line, Billy Hamilton. http://www.belfasttelegraph.co.uk/sport/football/international/billy-hamilton-when-northern-ireland-hit-the-world-cup-big-time-30332824.html

I’ll see yuz on t’other side.

One thought on “A new dawn?”