I am not a Buddhist per se Percy (if that is your name?). I am interested in the ideas of Buddhism but I am also interested in football and rock & roller which does not make me a footballer nor a Rolling Stone. The Dalai Lama is the living one amongst my ‘Six Mystics’, men of ideas who moved human cultures forward (to what I am unsure but to a better understanding of why we are here and to whence we are heading would help), which feature inside my Clay Jug Project. I say project, it’s fashionable to call a plan or a dream a ‘project’ because although it began as a topic in my MA studies it was in fact ongoing before that and it won’t leave me alone. Each of my six mystics has led me on in some way down the path of knowledge and each has signposted some area of ‘ideas’ which I have explored. So Joseph Beuys inspires my ‘performances’, not only because when I don a trilby there’s a slight resemblance but because he had so much gall and you gotta have loads of galls if you’re ‘performing’ art. Also he was a reject. His college did not like his ideas so he created his own college and basically had a ‘sit-in’ at the old Institution and his creation became more widely known than the Institution and maybe more influential on folk like Anselm Kiefer and others. Beuys may appear an odd one out in my 6 mystics but he was deeply into the spirit of ancient Celtic culture and each of the ‘mystics’ is into the spiritual in some way. I have always had this feeling that there is more to life than the everyday necessities. I looked up to the sky at 5am today and it was cloudless and thousands of stars were glittering in the darkness. There’s wonder out there and when you listen to Jung you see there’s wonder inside you too. Most of my mystics say that that wonder is divine. Or like Beuys they are driven by it. Hesse looked to the East for inspiration then he built the ideas from Eastern cultures into his books alongside his knowledge of western monasticism which itself was from the East- Egypt, India etc.

In a way I am talking about grace and empathy, skills I hope I am learning as I grow old-er. My one big example is the Dalai Lama who passed by me several years ago and O I was lucky to get a wonderful snap of him.

I intend to do some more artworks based around him in the not too distant. I did one awhile back and donated it to the Tibet Society and they were so unimpressed by it saying, ‘In Tibet we have a tradition of making images which goes back hundreds of years. We don’t do Impressionist works.’ So there. Get back in yer garret Peter. Here it is. I was quite proud of it.

I copied a photo of some mountains in Tibet with fields running toward them. The stripes running vertically at the back of the mountains are…more higher mountains, and that for me is a portrait of life. I climbed to the top of my mountain, passed my B/Ed degree, and found there was more to do. Now I got an MA too, and a few other things and I have stopped looking for mountains to climb. Not that I am tired, cos I am, but I have decided to enjoy the view more. Am looking back on my life and seeing what I achieved, sharing it with youse, and of course I shall continue to output. But let me show you this

where I took one of the mountains and placed an image of the Dalai Lama back in his own country. With a Tibetan wheel of life too. He’s pointing out that behind that mountain is a bigger one and behind that, infinity. 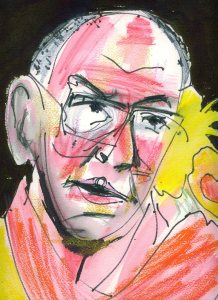 Which am using in my new mask for BABE in April. Am creating a new book with six re-worked masks in and six re-worked poems from G Batch & Inside This Earthen Vessel. One of the most impressive performances I have seen in all my days was the Tashi Lunpo monks doing Tibetan dance and music with these astounding costumes on. I won’t be wearing any costumes like theirs. In fact the skills employed in making them go back hundreds of years. 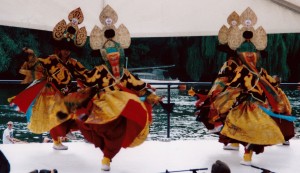 I am reading a wonderful little book by the Dalai Lama called ‘The Way To Freedom’ in which he explains a lot of the Tibetan Buddhist idea rather well. And I love the image on the cover where he’s got his hands clasped.

I went there on the day he opened the Peace Garden in the Imperial War Museum and I did a drawing for the Tibetans of him and the circle in that garden but they turned it down when I offered it to them. Once again it didn’t fit their ideas. No offence taken.

He’s in his tall yellow hat holding a Tibetan book called a pothi and overlooking the Peace Garden. And I got a yellow hat like what he wears, but I just look stupid in it, innit?

I have a BIG blart about a local much maligned gallery (of Colchester fame) forming in the pipeline but I need to wait for some replies to enquiries I am making so altho impulse wants me to do it this week the wise, calm strong steady side of me says WAIT. I come not to malign this gallery but to praise it. There’s been enough malignations hitting it already. It needs support and help to develop a better public profile and I’d like to help even more than my occasional blogs about it in the past may have done. Watch this blArt.