They tell me that ‘social media is most popular tween Mon-Wednesday? That’s not what hits on my blog tell me, Saturn & Sunday were by far the best shots this past week. And anyway, am on a mission. Am preparing folk to see the books at the London bookfair. Now Last time I covered the first 3 poems in letterpress versions by David Jury. I have now written on the next three, but I got busy and there’s a lot o stuff so am gonna spread it over tree blogs. That’s anutha ting they say, folk don’t want/go to blogs etc what have loads o stuff on em. And I am not finding that true. Folk seem to like the stuff watti rite.

OK sunday 14th, BANG GOES the idea that social media is most visited Mon thru Thors-Day!! This post which was put up yesterday, note a Saturn-day notta M-Thday,was ‘visited’ 44 times before sunadae began, with hits about even frae the USA and Britland. plus one or twa frum India and Aussidownthur. In my stats, it’s sat thru Tuesday what gets most visits. wed an thurs were lowest with 1 and 6 respectively. (Used to buy 10 woodbine with one and six (pence) forgive me young folk you don’t remember the old coinage, forgive me god fer smoking, luckily I givved it up when i wer 18, it slowed me doon on th’pitch!

One lady walked past me yesterday and she said, ‘I really enjoyed your blog this week.’ Somewhat taken aback, I didn’t realise she read it, I was able to show her DJ’s wonderful work, and she loved that too. Sorry I cannot shew it to you in the real form, only digital, but then you don’t feel the feel which is so vital. How can a digipic give the feel, the scent, the breeze of satisfaction as you look at something so tactile? Difficult one that. And tactility is a big part of an artist’s book book, innit? It’s a big part of what makes an artisbuk DIFFERENT from an normal book, even a normal book on a artis. I mean, some normal books are lovely. I am a book addict, book is my ‘habit’, I buy book everyday, mostly from charity shops as I cannot afford to pay shopnew prices. I have hundreds nay thoosands of books. Somebody suggested this week I should even be a ‘social media slut’ (slut, an interesting word) but am already a bookslut, I have a glut o buks. Many of them my own what avent sold (yet). I done this drawing a while back of an artisbloke wat looked like me pushing a barrow of remaindered books. Wonder if I can find that to show yez?

Soon after i posted this blArty bit an ole fren sent me a little poem, notice how it takes the shape of a pot. Is everyting gon potty? :

round an around,
the wheelie boy
with house on his hed
moves slowly and serenely
across our mind,
so smooth and silent
that we wonder if
he was ever there.

Anyway, different or not you still need to sell/promote yer output, no matter how good it is cos it won’t shift from yer shelves iffen yez don’t. So bear with me on this prolonged sales pitch.

DJ has now completed his letterpress version of my book Inside This Earthen Vessel which shows his exquisite use of what he calls in his most recent commercial book ‘the visual language of graphic design’. http://www.davidjury.com/various-publishers/before-graphic-designers.html  and we have series of postcards, poster and all ready for Whitechapel nex week, 26 – 28 September 2014. http://www.whitechapelgallery.org/book-fair/the-london-art-book-fair/the-london-art-book-fair-2014

It would be a good idea if you read my previous blArt first before this. https://apulhed.wordpress.com/2014/09/08/the-letterpress-version-of-inside-this-earthen-vessel/

In it I mention ‘spirit’ and I need to start this blArt with a little (?) question about existence and spirit, don’t I? Some may tink this has nowt to do with DJ’s beautiful letterpressed book, well in fact my original (little, not letterpressed) book of the same name is all about spirit really. It’s a metaphor for what is inside the jug which is a metaphor for the human body, or is it? I think it is.

*Spirit- there is a debate about ‘spirit’, whether it exists? Could exist? etc Of course in a material way it is impossible (for spirit to exist) without a body or some physical ‘system’/substance. There has to be some material sunstance for proof of ‘being there’. The human has blood, heart, eyes etc. A mountain has physicality too, some say it has spirit, like the spirit of Apu in the mountains of the Quero peoples of Peru, Mount Fuji and many other examples of the local folk attributing ‘spirit’ to a mountain. And then there is the Question about existence before the Big Bang? Was there a Mind? Is there a Mind? Is Everything a Mind? Mind you, I’m not so sure. Yet I think therefore Am I? And inside this body, this jug-headed entity I call me, there seems to be a mind, a thinking entity, which will undoubtedly, without exception, stop operating in the physical world when I die. The big Question is, will it continue elsewhere, to somewhere else? To Spirit on, that is the Question?

Like William Blake and C G Jung after him Scheffler seems to have had access to the hidden knowledge sometimes known as Gnosticism. http://ancienthistory.about.com/od/heresies/a/Gnosticism.htm

These had become, ‘secret’ or underground when the Christian church was changed in the 4th century AD and organised like the Roman army under Emperor Constantine who had been converted to it. Men previously competing in the groundswell of ideas which milled around the Middle East in 300-400 AD found their ideas had become ‘heretical’ after the Romanised church declared that they had selected (only) 4 of the many extant gospels, the rest were ‘binned’ so to speak. In the case of Pachomius who lived in a community of hermit monks (sic) their ideas came in the form of books collected from the then known world including places as far away as India. Like all pogroms* this new (Nicene) Creed outlawed thinkers whose idea did not toe the party line. So  Pachomius and his mates felt forced to hide their ‘library’ in a place called Nag Hammadi in Egypt where it lay, in earthen pots, for near 2000 years until re-discovered in 1947. http://gnosis.org/naghamm/nhl.html

(*the word pogrom comes from a russian word meaning like thunder, pity, if you subject a group to a force like thunder it’ll backfire, natural law)

David Jury has enlarged words like Nag Hammadi, and Logos to emphasise their importance in my text. He also makes the songline ‘Are We Humans Or Are We Dancers’ big. To do this he was real pleased to be able to utilise wood font which he had collected but never printed with over the years. David’s eye for composing the page is marvellous and we have done a full colour ‘poster’ with the layout so folk can see the masterly way DJ wields the letterpress tweezers. 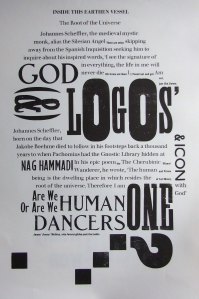