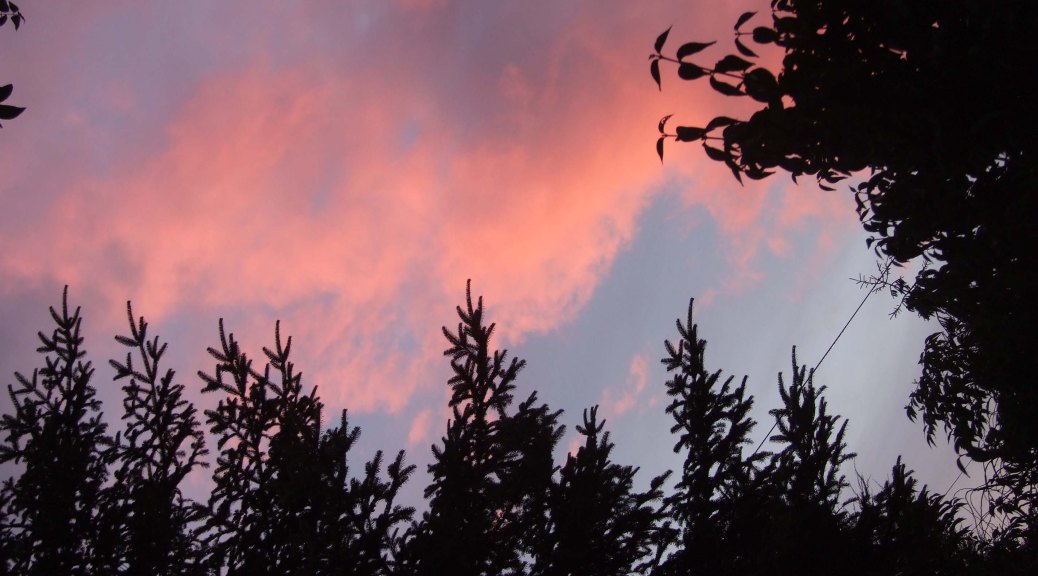 As the sun set on my teaching ‘career’ I look back on many great experiences and surprises. One of the biggest happened early on when I realised the educator learns as much from the learners as the learners learn from the ejucaytas.

Some teachers are great. They teach their subject and they inspire you to great things, they give example how to act how to conduct yourself just by being themselves. See my earlier blart: https://apulhed.wordpress.com/2014/08/12/i-were-a-teacher-once-but-am-recovered-now-i-met-r-a/
Others are not so good. They try to get you to conform to some prattish canon only they understand or think they do. They try to force kids to get it right, do it this way not that etc. all they do is damage in the classroom and turn kids off, make them into rebels. So the reason I becAMe such a rebel is their fault. I should be thankful to them in a weird Buddhist way. I had this distaste, nay venom, neigh vergin on hatred for authority figures by the time I left gwamma skewel. In fact that was wat drove the ritin of my first self-puberlitsched buk in 1975, Apul-One, wid its non spellin and all. 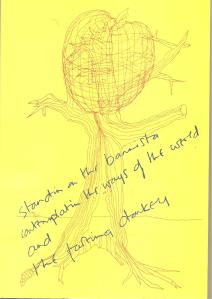 A form of ‘up yourn, ya tossa’. I now, after all these tears, realise that it underpins so much of the chagrin which seemed to burden my shoulders ever since ‘schooldays’.
As a youngster you witness these things and you sense or know they are ‘wrong’ yet your only (apparent) way to counter it is (it seemed at the time) to be madder than they were. So they never knew what your next move would be, whether it may be violent which is what they expected or peaceful which always surprised them, unseated them, when I did not (over)react to provocations. There were corporal punishments back then (in the 60’s) some of which I knew I ‘deserved’ for my cheek.
Once, when about 14, I upset the geography teacher, Herbie Geebiees I think his name was, he had that tight Brylcreamed hair combed back in short waves, he deserved to be upset. Anyway I was pranking about and he said he were going to pump me, go and get ‘Oscar’ he told me. Oscar was a size 11 base of an old pair of plimsolls which you had to bend over to and submit to 3 or 4 whacks in front of the class. I mean it was a point of honour to be pumped by some prateacher. Anyway, because I was a good boy what went to ‘dinner time clubs’ I knew that in the drawer where Oscar lived there lay his tiny companion, ‘Little Oscar’ what wer about a size 3 sole of pump-base. Now I saw a ruse, I would arrive with ‘Little Oscar’ which I did and got guffaws and gasps frae the crood. Then I went dutifully back to get Big Oscar and submitted to an extra ‘pump’ for my sins.
Another famous incident, the head had just said in assemberly not to throw the snow as there wer ice in it. So this merry prankster saw an opportunity to hail his classmates with snow&ice from the field as they huddled obedient to the head’s instruction in the doorway, I had a right laugh. Little did I know the head of PE Perrywhak was on his way and they knew that and it wer too late to stop now when my last ball hurtled into the crowd which had a big smile on its face as the teacher opened the glass door and my iceball hit him square in the face. Kennegly, follow me, bend over, Three pumps, did that hurt he said? Of course not said I and of course it hurt. But I knew I deserved that, in that old fashioned way. And that was the way they tamed me, that’s why I became, of all things, a teacher isn’t it? No not to pump pupils but to show it could be done sans pumps. But really it wer those who abused the old system who taught me most of what NOT to do.

Bolscrost was a proper bully. He chased Cookie around the class pumping him at every turn when Cookie had begged him not to exercise the punishment for not handing in homework as he had a boil on his asp. Merciless that may be but worse was the way he treated Riley the class truant who never did any homework. So one day he got Riley to bend over by the old iron radiator, so that as the weight of the strike went thru his body causing him to bring his front end up Riley’s head would strike the rad. Bastad. And as 15 year olds we didn’t know how to prevent it other than jumping on Bolscrost, watch out old boy, I never forgit.

Then there’s my 6th form tutor Reinneighs. He hated me cos I refused to pay the 30p ‘voluntary contribution’ to the sports fund for two years. I was making the point, it was voluntary. Finally he arrived at my right side asking for it just as they handed out the History ‘A’ level papers. I think he was hoping I would give him what he deserved so I would get carried out in a straight-jacket but by then the early hippie love and peace vibe had overtaken me and he survived and I got an ‘E’ in that exam. My course work was good, I was taught by a hero of mine called Dan Playtown and for my essays I used to get between 15-17 on 20 all thru the 6th form which is a good deal higher than an E. Altho Mr Grovelips recently brought back 3 hour end of year exam in his great public school wisdom I am for obvious reasons a believer in bringing the two years of ongoing study into the mix when a student’s work is assessed. But of course I only taught in primary, secondary, tertiary, special school and adult evening classes for 20 odd yearns and got a B/Ed Hons., an Advanced Diploma in Special Education and a Diploma in Management Studies, so what would I know, not as much as that nice Mr Grovelips hell no. I should never have stayed on into the 6th form anyway it were a right darkole, I should have left and gone to art college, but in those days we usually served our time. And I did at least beat the victores ludorum lad, a tall fart called Mallardson what couldn’t play futty for fudge, in the high jump in the school sports. I always wanted to reach up high.
Then, when I began to teach I witnessed a  teacher called Stain (that wasn’t his main name) and his nasty ways. We were questioning a young lad in the foyer about some minor misdemeanour and I momentarily looked away to turn back to see the kid gagging and holding his throat. Apparently Stain had hit him with the side of his hand in the throat when I had been distracted. Stain wer in th’territorial army so he knew how to tame these recalcitrants. Stain wer a little short stumpy bloke with a head nearly as wide as his shoulders and it wern’t full of brains. He obviously had a chip on his shoulder too, or a bag o chips. Now, because I hadn’t seen it I had no proof and he knew that. Back in those days I felt I couldn’t take it to the school leader, who was pretty ineffective anyway, but nowadays I would most definitely call the man to task. In fact it got worse. Several years later the prat went and accidentally broke a kid’s leg in a student v. staff rugby game. County banned all such games after that.
These types see themselves as the door keepers but really, really now, they are not fit to be floor sweepers. The best I can say is that I learned from them the way not to be.

I saw Alan Moore on Channel 4 news last week. In the interview the reporter asked him why he addressed some pretty obnoxious issues in his storylines? Moore said that these things go on and there is a need to get them out there, talk about them rather than brush them under the carpet, open the debate and work out ways of tackling potentially solving them. So, a couple o weeks ago I did a blart about ‘good’ teachers, those who act in positively friendly ways to influence. But, like Moore points out, there is a good side and a bad side to most everything, a yin and a yang which intermingle as they pass into one another. My Tai Chi master was explaining to me about the art of ‘push hands’ and he said you ‘sense’ the other participant’s moves and when they move to overpower you, you sway and disarm the force. I think that is yin, giving way to yang? Then he said, ‘My Yin becomes my Yang’. So these ‘stories’ based in my own experience are me exposing some unethical deeds, like Moore I am talking about them, not hiding them. The perpetrators need to be revealed. To do that I suppose I am applying a yang force. These men were bullies who used their positions to attempt to get others to conform to their set of values. Good or bad values it doesn’t matter if the methods you use to inculcate others into your canon are unethical. It may be questioned if I am right to reveal these issues from my life? Well really I should maybe have ‘gone thru the proper channels’ nearer the time (1960s & 70s) but as always back then and now, I did the best I could. In fact my ‘standing my ground’ brought about the heinous interruption at the start of a public exam. I still cannot see how that guy could have been brought to task by the authority figures of the day.

Bullying still occurs every day and I saw and was subject to various forms of bullying when I was in the work place. At the time these things can be hard to handle, cope and manage. I was brought to my psychological knees by one head-teacher and what made it worse was it was a female. I couldn’t cope and eventually after the union proved toothless I left that job, even tho she recanted her errors and said I could stay, forever. Hell was not for me I went elsewhere searching heaven which I found bits of but always under the covers you might get another glimpse of hell. Which is what Alan Moore deals with, or not. I think just addressing it, outing it, exposing it, making sure they don’t get away with it without others knowing they are doing it is the best way to curb it. So forgive my excursion into the dark zone. Like my great predecessor, Spike Milligan, you may notice I also add some humour. At least I think I do.

And to end on a positive note I wer watching Kate Bush on beeb4 lasnicht and wow watta star!
http://www.bbc.co.uk/iplayer/episode/b04dzswb/the-kate-bush-story-running-up-that-hill

the second link below is her singing a song in which she mentions Gurdjeff! Listen carefully, she mentions him at about 1min 40 seconds in, ‘They read me Gurdjeff…’ The they she refers to is her parents.

footynote- I have altered the names of the players mentioned above not so much that their identities can be disguised but because I don’t wish to face them down in any arena. They had to live with their mistakes. We had to live thru them. and, I suppose, nobody’s perfec.