First I want to note how nice it was to receive a note of appreciation on twitter from somebody at firstsite for my blArt last week about Bruce McKlean’s show there. This blArt is about this week at Courtauld’s wonderful new exhibition. The Courtauld is held in high esteem and I must say i have always been impressed by their collection and particularly by their library which is set in astounding spaces underground. They have a box with a collection of my artefacts in as part of their massive library on most every artist that has ever done anything of worth. I watched the interaction between the students and their tutor guides and other curators and was most pleased to observe a wonderful sense of trust and honesty there which I am certain is the foundation of their great reputation. These attributes are a great asset and they should not be taken for granted as they are not present in all establishments. The exhibition by the students is locked in to a bigger show about the Institution’s large print collection although many of the works accessed by the students for their show came from elsewhere.

A trip to the Gallery

Did you ever ponder upon the process of making a print? These MA students have advanced the idea of the imprint for me. The impression left by someone’s hand in the fabric of the settee inspired them to search for evidence of the clever ways people impinge on surfaces to impress so subtle ideas on varying materials for us to enjoy in such abundance. Carefully selected and placed pieces thrill your tactile sensitivities.

The sheer plane of a photograph on an aluminium surface in the late Donald Rodney’s ‘In the House of My Father’* is placed next to the weighty black bolster sinking into the soft white pillow. Matt Collishaw’s blind embossed letterpress page from D H Lawrence echoes the UNO City impression by Langlands & Bell. The image of the chair next to its cane impress on handmade paper is juxtaposed beside the colourful soft flesh photo-etched buttocks which may have sat on it by Tim Mara in an exquisite display of his dexterity in several print forms on one small surface. The fine sand in Mona Hatoum’s dual between positive and negative forces as the wheel in time first creates then flattens furrows in her ‘+ and –’kinetic sculpture. The form of the human torso tattooed totally in taboos and traditions by Edward Lipski. I could wax lyrical about the whole show but the truth is you must see it for yourself.

* Donald Rodney inherited the blood disease sickle cell anaemia from the house that was his father. This he illustrated beautifully in the print of an enlargement of his own hand in which you see his fingerprints and on which he has created a small paper house. This is a wonderful visual analogy of his predicament which he must have created in full knowledge of the inevitable outcome and gives us an insight into another form of edition, the evolving human being.

Young Stuart Moss called us to attention, well he tried to but as we were all chattering away he could not do so without doing a little dance, then we all followed the little pied piper into the main gallery to listen to the grateful speeches mostly attributing praise to the eleven relatively anonymous student curators who did show their hands when requested to. 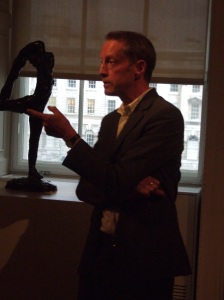 (Head of MA Programme: Curating the Art Museum), Martin Caiger-Smith’s talk was gentle and inspired with humour, (forecasting the demise of the England team which was being marmalized & condemned to world cup oblivion by Louis Saurez as he spoke), with sympathy and appreciation about the team of graduates who had worked well together to prepare the exhibition over the past six months. 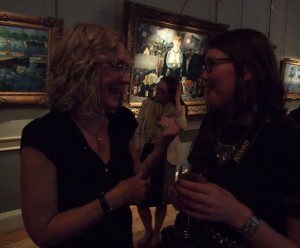 student in conversation with senior curator

The encouraging mutual affection between teachers at the Courtauld and their students is admirable and deserves notice. This mutual respect generates an atmosphere of trust, support and the expectation of high standards, which are evidenced in this sensational result, an exhibition of the highest calibre which I recommend wholeheartedly that you visit. It stands alongside the present feature of ‘From Bruegel to Freud(el)’ curated by Rachel Sloan,  a show of the continual re-invention of print-making, at Somerset House until September 21st. It is well worth a visit if only to catch a glimpse of a beautiful artist’s book by Oskar Kokoshka.

I never knew the great man began as a printmaker!

Don’t be fooled like I was by the Day at the Races print either, I assumed wrongly it was another Degas, but no, it’s by Toulouse Lautrec, the boy was good you know!

A small concise well designed booklet accompanies the show contains well informed descriptions of the exhibits by Jack Shepherdson, Charlotte North, Jazia Hammoudi & Madeleine Kennedy. I found the glossary of printmaking quite enlightening and useful for an introduction to some print processes, although the work in the show incorporates more advanced methods too. The students were allowed to choose prints from any source that they thought was appropriate to their theme and their choice of exhibits shows great understanding and appreciation of the subtleties of the ways people make marks in edition or continuities.

Finally. The welcome we received with constant provision of light refreshments from another fine team was likely to IMPRESS even the coldest heart.