Hey, some really intelligent folk are enjoying my blartinon, which makes me enjoy it too. I tink maybe I should do dat ting and make it easy fer ya to contac me by email, there’s a ting yu can dae.

Talking about Scotland and original flair (in my case flare) which their players used to have in ’s bucket loods, their youth training in football has apparently improved after a slide backwards over the previous period of 30 years or more. In my day footballers had balls and they played on the streets when they were knee high to Jackie Charlton who also played on the streets wi’ his bro in Ashington where Jackie Milburn had played before the Second World War. In fact my cousin Richard played on the island of grass on his hoosen estayat in Mooorpet hinny, (tings had moved up from the streets by then), and Jackie Milburn came out in his, well he must have been in his 50s, ancient, hey watch it I played into my 50s.  We were, as a yoga friend said to me recently, street urchins. Who’s that bloke what likes chewing other players? Plays for Liverpool. Well he were a street kid too, that’s why they can’t contain him, they just cannot predict where he will go to. Me and Kenny, you could predict us, but you couldn’t stop us. We would approach you on the right, lean to the right, then stoop left and leave you standing me and Kenny would, and of course Jimmy Mac the Burnley wizard. He wer better than Kenny, and me. Anyway Scotland, where me and Ken hail frae. They just wernt producing no more Kenny Dalgliesh magic not never. Watch that space cos tings are changing. I wer listening to Neil Warnock talk about the recent development of Scottish Youth football from the bottom of the pit with kids having all the original flair kicked out of them to fit into the limited vision of the game’s bosses. Warnock praised the Scottish FA for its vast recent improvements and I saw some similarities with ‘Art’.

The demise of the arteducationworld because of their reliance on ‘sameness’, started sadly for me, with the moves in the late 1960’s to ensure ‘standards’. They began to make GCE ‘O’ level a must have, several if possible. So an artist like Alan Aldridge, who had a major influence on graphic art, and they say John Bratby too, would not have gained entry to art college had the new rules been in place earlier. Since then the entry requirements have continued to rise. Then of course there is the problem of adherence. Adherence to the state of the art of the day. Henry Moore became old fashioned, Caro was the big boy now. I remember going into Burnley art college about 1968 to see a full time student on a pre-dip course. He was busy taping up a canvas, ‘straight edge, the latest thing from  the States’ he informed me, altho I wer already informed. I read Studio International every week in the school library and was aware of all the stuff that was rising to the top…I had visited the Tate and seen the real thing and had decided I wer not going to follow no American school, I wer sticking to my own guns. Which at that time were loaded by Matisse’s late collages, and the work of the Fauves on one hand with Scarfe and Dudley D Watkins on the other. I also stayed in David Wild’s ‘life’ classes to learn how to paint those darned nude women. (David had more pages in Alan Aldridge’s second Beatles Illustrated book than any other artist BUT he chose to stay in or near Burnley not London and consequently was left standing in a field with his paint brush in his mouth.) I had to plough my own furrow, which I did despite my finding myself far out in deserted fields outside the fold like David did. Richard Morphet, once Curator for Modern Art at Tate (before the BIG Tate wer begun, said my work wer very ‘German’ I asked him to purchase some, he wouldn’t, I offered to give him some, they wouldn’t. It’s to do with validating, they can’t accept a gift in case you use that acceptance as validation and/or ‘endorsement’. I once had a lovely letter from Nicholas Serota when I moved up to him about ten years after asking RM, he said in the letter that they wer interested in principal in having some of my art and in some legal jargon warned me not to tell anyone. Then he passed me down to his deputy and I wer passed down and down and then the janitor had to take responsibility to say they wer not interested. In fact it wer the flea on the janitor what said no, go away, don’t darken this door no more. I tink it wer the same janitor as the one in the Hollies song in the 60s? Did you know the drummer wer from Burnley?

Then I took the flea out of my ear and I aksed it, are you related to that flea the spirit of which Bill Blake once did a skinny little picture of? And the flea said, I cannot answer that query you furry fairy gotpater for fear of discriminating and you know what that means! I said yes and went to seek out Blake to arsk im misen.

It wer a bit of a mystery to me why RM had likened my werk to ‘German artists’ until earlier in March 2014 I popped up to the exhibition in The Britischt Museo featuring graphics by the likes of Baselitz and there I saw images almost identical to some works I did in the 80’s, which RM never saw. I knew Baselitz’ style was close to mine only he did his onto canvas upside down, identical technique to some of my works, but the difference wer, he wer German and his work cost more. I discovered my images wer also uncannily like some of Pencks too. 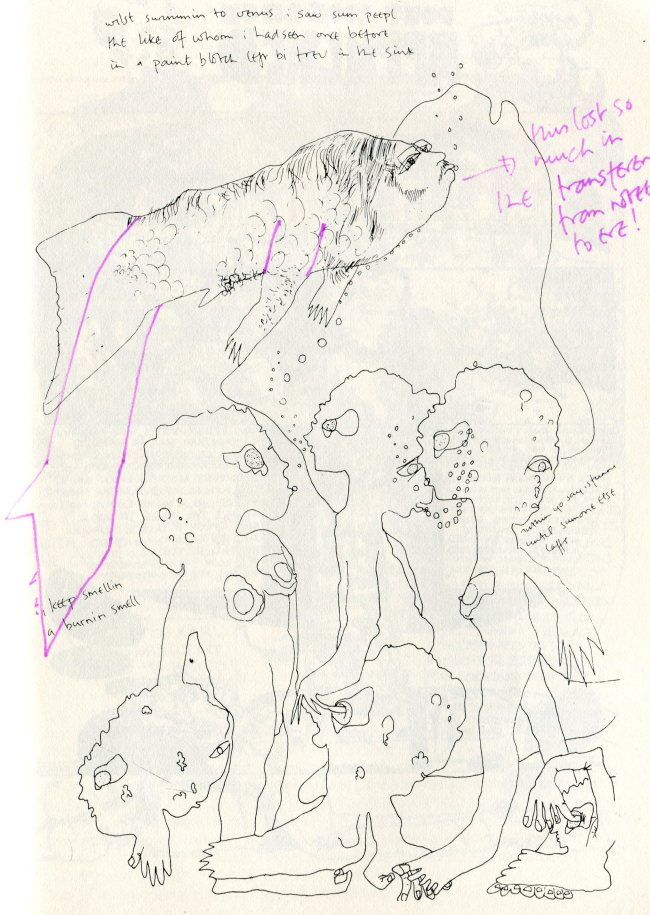 But really, my track record doesn’t fit the bill. I didn’t transit thru all the correct channels, the right colleges for Diplomas in art (later degrees) and then RA, RCA, Slade etc for post graduate. I thought that just living a life and dedicating to ‘art’ wer enough, silly me. Best I can be considered is ‘self-taught’, ‘outsider’ naïf, art brut, a blaggerartis. My perpetual strive to be good, to master, say, the art of portraits in oils, were hard earned and more than once my work was compared not just to German Germans but to British Germans like Auerbach. There was a reason, we had the self-same influences, not that I copied him. His tutor was Bomberg, one of my heroes, I met his sister, surely that makes me ‘good’? Bomberg’s hero was a man called Haagensen, I knew  Haagensen’s widow until she died at 95, surely that makes me good? Rembrandt was another joint hero and so wer Soutine probably. Neither of them went to the blue ribbon British colleges but both of em did ok, Soutine even has a statue near on on the Paris railway stations.

No I didn’t wish to go thru the sausage machinations like young footballers did in Britain, all churned out with the same predictable style or stamp. I ate drank and slept art but the keepers of the galleries didn’t appreciate the sacrifices nor my accomplishments which wer hard to acquire, to them I wer just another sosige, an they dint like home grown organic sosiges. Wat kant spel.

I am not knocking art education out of hand as there has been a boom since 1945 and this country produces a high number of talented artist in many fields. But I am knocking the closed doors of the art market. Many if not most of my own influences came from across the waters east and west. My modern influences are mostly European and American, not British, and that went for the written word as well as the visual world.

Let me look at some; Arshile Gorky, Hundertwasser, Alan Davie & George Condo have all inspired me lots. Altho I have developed my own vision I see stuff in their work wat I aspire to. It’s not to do wit copying, plagiarising nor appropriation. It is to do with feel, difference, specialness. Applying method, techniques, skill acquisition to my own body of werk.

Gorky was influenced by Picasso (who wasn’t?) & Cezanne. Hundertwasser was influenced by Klimpt & Schiele. Davie by Van Gogh and Australian and other aboriginals. Condo just takes the p out of everyone, mimicking and making everyone outrageously ugly. I am influenced by everything I see. Which helps me to introduce my Squidgerats. They are amalgam. They amalgamate everything from my life; visual, historical, psychological, experiential and everything that has happened to me and the world I inhabit. In them I can do portraits, landscapes, still life, all in one go. I can extemporise imageslike a jazz player does notes. My colours, where I use them, can be apparently random but in fact after a lifetime of looking at art my colour sense is quite well developed. I do however choose to use colours that clash, see the banners I did in previous blarts with words on about the six mystics. Eventually I shall do a glossary with as many of my squidgerats sketches in as I can, there’s hundreds so that’ll take time. I hope to produce two squidgerat artist’s books within the next year. They are beautiful, formidable, obsessional. (note in those 3 werds there are three differing ways to ‘say’ the ‘l’ sound, ‘ull’).

Obsessed I is wit changing tings, re-arranging tings, re-phrasing tings. And my squidgerats do all of those tings with visual ‘reality’, they take the tings which hit my eyes then brain and re-present them in apparently impossible combinations.they are my Dante, my Blake, and my Patchen, in effect they are my originals, my life works. Everything else is merely support material, experiments, trials, learnings etc.