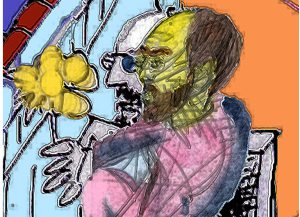 Now I have a surprise for yez, a little private ‘seekwet’, a little ray of Sunshine (not). I have to introduce you to my ‘littul helpa’, Daniel O’Blarty (Dob for short) who, I have to admit, has insisted on having some input to this blog since it started. Because I wanted to bask in all the glory misen I tried to keep the sekewut between him and I. But like me old mum used to say, ‘the truth will out’ and his mam would have said ‘tha troot weel oot’. The fact is O’Blarty is a distant cousin of mine from the olde country of my predecessors. He arrived for the weekend a while ago and has been here ever since. I have avoided making his contributions known for fear of contravening some recent rule about residence, entitlement to dole & housing allowances or payment of bed-rheum tacks. Oops there I go again, I’m afraid his influence is insidious, creeps up on yez it does. He is the same character that I wrote about in my tome with the working title, I Told You I Was A Genius where I disguised his identity with an alias, Rhody O’Dourke (O’Dork for short, Dork for even shorter). [If we can be bovvad to put his two monikers together and we have Dobdork!] or even Dork de Dob etc.

It all came out in the wash after the recent floods. People have been asking (he’d say aksin) why do I mis-spell words (werds) well truth (troot) be known that’s him! Sometimes as I’m writing he takes over my very pen and I’m too care-full to prevent him for fear of contravening some rule on political correctness or worse, race relations. I have to admit that I’m glad to have him around sometimes as there is a long tradition of great writers from the Olde Country; Jonofpen Swift, Dylon Tomas, Bendarn Behine, Rabbie Sideburns & Oscar Tamed were all frae Celtic soils. So from now on you’ll be able to tink to yourselves (yersens) or say out loud even, even unevenly, ‘Oh now I Understand, that’s not Pete (da Feat) who’s mis-sphelt that or said that profane ting or gotten it totally out of context, it must be his (illegal) immigrant helper Dan O’Blarty otherwise known in the Anglicised version of his moniker Dan Blarty or as they say in the Olde Country, Damien Blasterd?’

Author’s note. There is a long line of word changers, Shamans o’ de Pen including Flan O’Brien, Jimmy Joyce (as he’s known to his mates) and Georgie Herriman

whose Krazy Kat is for me the greatest komix ever by an  Arizonan country mile! Although Sheila Hodgett’s Toby Twirl illustrated by an e. Jeffrey is a stunning second for me published between 1946 – 1958 when I wer a lad.  http://www.tobytwirl.co.uk/ 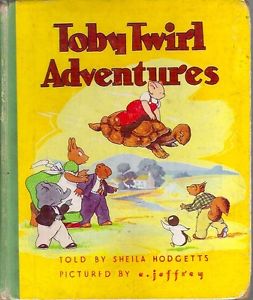 So. They invented characters, which is what the artist/writer artisriter does. In their day Krazy Kat and Toby Twirl were hughely popular which is no longer the case. Blake went the other way, his stuff was not popular in his day but has now got an international acclaim. Me, well I invented Apulhed, well at least once upon a time i believed i did. In 1971 I was a 20 year old student from Exeter working in Bournemouth for the summer when I drew my first apple with a face on adding things in its mind so you could see what he was thinking. 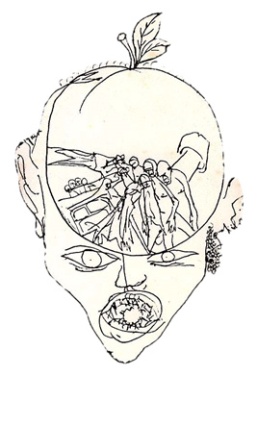 At the time I was very interested in extraterrestrials and whether they had ever visited planet Earth but soon I came to realise he was not extraterrestrial, he was from another dimension. Then I found an etching which he did where he was drawing me! 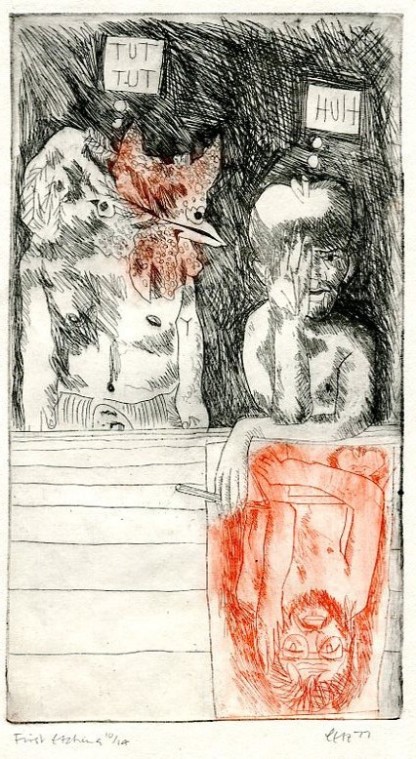 And his tutor was looking over his shoulder saying, ‘Look at what you gone done now. You do know that somewhere, in another dimension, that monstrosity will now come into existence?’ He created me! So he drew me so I could draw him. Later on when I created the Nonogon Nomads I pondered on whether or not they merely used me as a vehicle through which to manifest in this dimension. They are avatars. They each represent a human psychological attribute. They may even all be different aspects of my Self? Then I created Rhody O’Dourke, alias Daniel O’Blarty. Or did I just realise them? However, words and imagesare (only) symbols for ideas. Ideas are representative of concepts. Concepts are attempts to convey ‘real’ or imaginary perceptions. So (I invented) Apulhed and most of my ‘characters’ to convey ideas, concepts, perceptions & notions, from my understanding and experience. Together I use them in my (sometimes) rather pitiful efforts to convey stories, true or false. But that is what artisriters do. We (humankind) rely on them to ‘think outside the box’ to ‘create’ new worlds or new views on our world and other possibilities. I for example look to the likes of Hundertwasser, Alan Davie, Kurt Vonnegut, Philip K Dick or even Philip Glass to create inroads into other dimensions of thinking hearing and seeing. Then, when those artisriter-musiciens raise their heads above the parapet we often shoot them down and say hey you, how dare you say you are good? We desperately need your input but don’t expect any reward, just keep on doing it til you disappear off this mortail coil and then we will say wernt he good now we can sell the work he left and line up in our thousands at variouarse citidals of fashion and say hmm this was a good one or this was not one of his best and all the rest of that carp.

I’m not a bitter man, in fact I don’t drink beer at all. Am stopping here, believe it or not this has taken days to write and you need a rest. I shall try to arrest you again with a follow on in a day or two.

You know from my calling card that I was awarded Royal Akademy ‘Doubtful’ status in 2008. But there is another, even worse, RA in my life, Rheumatoid Arthritis. So, I have a swelling on my right mid-knuckles, it’s a rheumatoid factor, may be a remnant of when I was seriously incapacitated by my unwelcome lodger, Ruemore-Toad (face) Arthuright-ass. I had almost cleared every vestige of the damn feller, with the expert help of my doctors, Walters & Ovareachi. Plus an ever increasing schedule of light fitness training in Tai Chi, Ashtanga Yoga, Gym, Zumba and Tantricks Sex. I had rid mysen of most outer showings. Then recently a new swelling erupted around my middle knuckle. Being hypochondriatic I began to wonder what had caused this renewal. I went thru a number of possible causes. Then, as is my wont, I was reading Flan O’Brien’s book A Hard Life, as it happened, shortly after I had determined to discover the cause once and fer all. And there it was in his very words! Tha answer. On page 17 Mr Collopy is reminiscing on hurling sticks, ‘Many a good puck I had myself in the quondam days of my nonage. I could draw on a ball in those days and clatter in a goal from midfield, man.’(So similar to me on the football field but I used to punch the ball with my fist!) At which Mrs Crotty said bleakly, ‘Well it’s no wonder you are never done talking about the rheumatism in your knuckles!’ there it is, the cause. Recently I have been using a sledge hammer to hit some wedges into various sized logs to split ‘em. Sometimes the logs resist and take many blows which I knew had affected my ears cos my tinnitus returned (I never knew it had gone til it came back). But I was not really conscious of the damage it wer doing to my knuckles. I even blamed this typing lark, thought I may have to refrain from me blarting. ButNo, (me dad would have said ‘But no buttie’ as he were Welsh), I shall have to stop the splitting and hope the knuckles can recover. Funny that, I never did curling, nor cricket for thet matter and rounders, well I couldn’t hit an elephant’s arse with a ball hit from my rounders bat.