I have not done any pages here this week as all of my time has been spent doing a new article about the activist Lucy Lippard. I had promised to do it back in April but was advised to get my MA completed successfully first which I done gone and done now. So, the writing thing. Although i never set out to be(come) a writer it happened on me almost by default. I kept a journal from 1969 when I kicked off the traces of my schooldays when i had been put off doing English Literature as an A level by the too seriousness of those taking it, teachers and pupils. Luckily I had a great teacher for History who as an Oxbridge graduate introduced me to essay writing wherein we referenced several sources in prep for out essays. He gave me a love of articulating an argument in written word. My art teacher at school was no great stakes at teaching the skills of making marks mean what you want them to say, David Wild at night school gave me that secret. Mr Bennet, who must have been 7 foot tall, gave me the ability to argue the point, he did so by constantly teasing me, hitting the button he knew got me flying. But David Wild was the Slade scholar who shewed me how to draw with the paint and although his god was Cezanne he never stopped my rapid rise thru the Impressionists to the Fauves and on into Expressionism. At the same time I was impressed by Gerald Scarfe and his work brought out my cruel streak and I started doing ‘caricatures’ of pupils and pop stars, in fact that streak spilled over into my portraits and I could make the bonniest woman look ugly. ask my wife. This interest in questioning appearance led me to create Appleheadman/Apulhed which was a cartoon character which I used to convey my interests. At the time I had left the security of my home in Brunlea and gone to the wilds of Exeter in Devon. There were the perpetual wars and strifes which existence seems to foster and I got really upset by the state of Biafra, Bangla Desh and Northern Ireland where Bloody Sunday had just occurred. So the first Apulhed used to have scream on his face and talked about all the world issues that were upsetting. Whilst I was doing the Screaming Apulhed stuff i went up to taklk with the editors at ‘Oz’ the underground mag which was hitting the headlines as i wanted to contribute my graphic strip to their publication. I was put into a room with Jim Anderson who explained they only printed comics ripped off from America by the likes of Robert Crumb but they liked my writing, would i like to do some writing for them. I saw myself as an artist what wrote not an writer wat drew so I firmly declined the suggestion. And walked away from what may have been a big break, or not.  Then i found that they , the issues, are never ending, they just change venue. So I adopted a more zen like approach and created ‘Happy’ Apulhed who went around observing human activity but never intervened. This led to my strip being in Sennet the newspaper of London students and later Cantab of Cambridge Uni. In my strips the written word supports the visuals. Meantime I continued my journals which I always felt would be the source of books in the future, which they would but not in the way i perceived.

Anyway, recently I have started writing for outlets like the Artist’s Book Yearbook and am looking to extend the remit because I enjoy putting together arguments and ideas to share some of the things I have gleaned. Which brings me to the Lucy article.

I admired Lucy Lippard’s life work challenging the established status quo and her impact has hit me way beyond my expectation. I never realised when I felt so attracted to go see her at Whitechapel that my connection with her was so strong as fellow subversives keen to carry on pioneering new ideas through our work and taking on those who stand for standing still. Now I am ready to fight my own fight now. By that i mean I am prepared to stand up and say my piece more on issues like the art world and other things. I did the drawing below of Lucy from observation and i found an uncanny resemblance to an African mask which was in my front room when I got home. I love all that coincidence stuff. 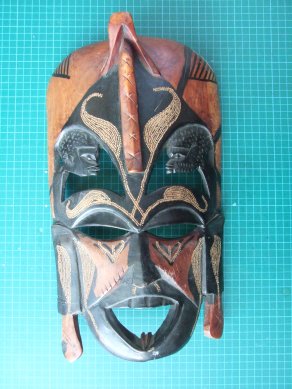 2 thoughts on “fighting my own fight”